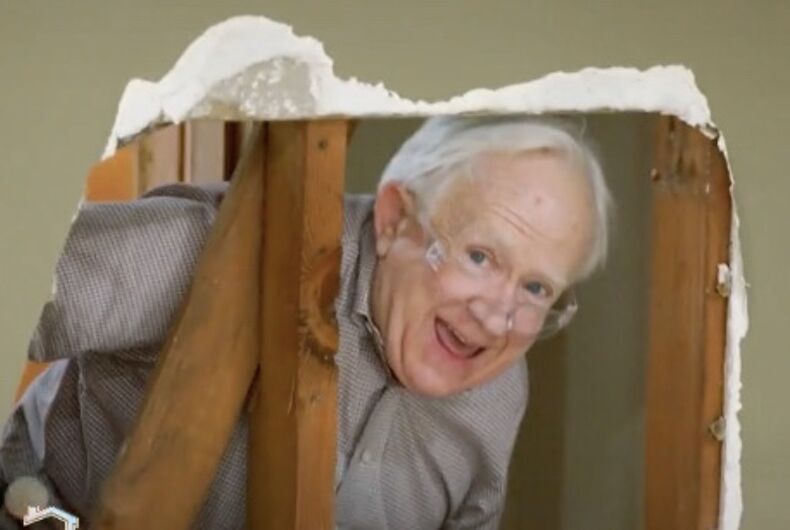 Recently deceased actor and comedian Leslie Jordan will be making a surprise TV this month in the season 3 premiere of HGTV’s Celebrity IOU, a show where celebs give major home renovations to people who made a big difference in their lives.

A preview of the episode, posted on Jordan’s TikTok account, shows Jordan working on a home alongside the show’s hosts, Drew and Jonathan Scott. While the preview leaves it unclear who Jordan is thanking, it shows him playfully joking with the Scott brothers in his trademark style of humor.

In actuality, Jordan chose to renovate the home of Newell and Rosemary Alexander, two fellow actors who helped Jordan get into theater and became a family to him when he first moved from Tennessee to Los Angeles in the 1980s to pursue acting.

The couple played a regretful bar owner named Wardell “Bubba” Owens and an obsessed homophobic therapist named Dr. Eve Bolinger alongside Jordan in the 2000 southern gay comedic film Sordid Lives. In the film, Jordan plays Brother Boy, an effeminate, cross-dressing gay man who is forced by his family into a mental institution for 23 years because of his homosexuality.

“Leslie says the couple has always been there for him, especially through some hard personal struggles,” the HGTV website says of Jordan’s TV appearance. “Although he admits to having no construction experience, Leslie is ready to swing sledgehammers alongside Drew and Jonathan Scott to thank Newell and Rosemary with a striking renovation of their charming but dated ranch-style home.”

Make sure you catch Leslie on @hgtv for the season premier of Celebrity IOU, November 14th at 9/8c.

Though Jordan was well known for his recurring role on the gay sitcom Will & Grace, he also appeared in several seasons of gay TV producer Ryan Murphy’s horror anthology series American Horror Story.

Jordan also published a 2021 memoir titled My Trip Down the Pink Carpet and an autobiography titled How Y’all Doing?: Misadventures and Mischief from a Life Well Lived. In 2021, he also released his first and only album, a country hymn collection entitled Company’s Comin’.

Jordan is believed to have suffered a “medical emergency” while driving in Hollywood, leading him to die after he crashed his BMW into the side of a building.

“Leslie Jordan was one of the funniest people I ever had the pleasure of working with,” tweeted Jordan’s Will & Grace co-star Sean Hayes. “Everyone who ever met him loved him. There will never be anyone like him. A unique talent with an enormous, caring heart. You will be missed, my dear friend.”