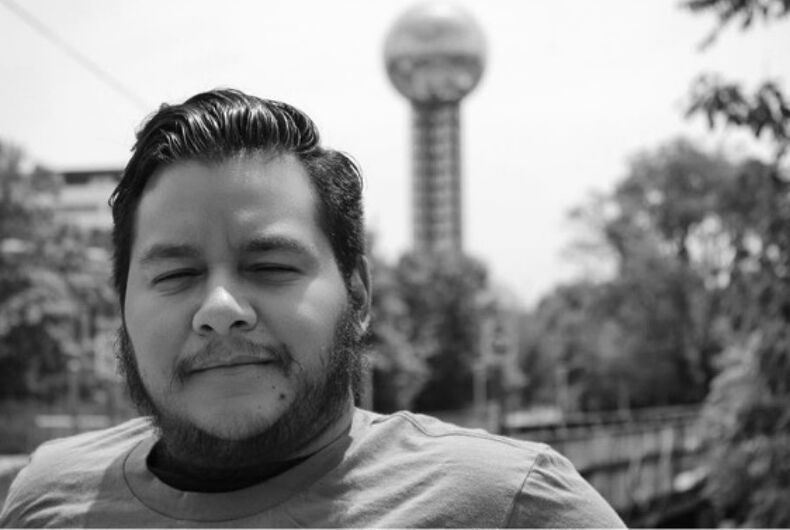 “How can I help?” That’s the question Heather Knoxville says her husband Jack Knoxville is always ready with. “He’s a powerhouse, creative, brilliant, just an organizer at heart,” she says, and “very empathetic and able to understand where people are coming from, and what struggles they’re going through.”

Jack Knoxville, 43, is the founder of the Trans Empowerment Project, a non-profit based in Jacksonville, North Carolina with a mission to “ensure that our most marginalized community members, disabled queer and trans* people of color, can thrive and live their best lives.” Knoxville, an Afro-Latino trans man on the autism spectrum, counts himself among the members of the community he rallies and serves.

“I’ve pretty much grown up living out of my backpack,” Knoxville told LGBTQ Nation. “I’ve actually been on my own since I was about 14.”

He began to recognize his gender identity in his 20s, in the midst of a relationship with a woman. “I’m watching this Netflix doc, you know, listening to all these trans people telling their stories. I was like, oh my God, whoa, finally, my people.” He started his transition in his namesake city a few years later.

In Tennessee, and the South in general, Knoxville says trans people of color “face every boundary you can imagine. People don’t want us to exist.”

First and foremost, he says, “is the racial aspect of it. Because there’s a lot of things we can hide, but we can’t hide our race. And so right away, the deck is stacked against us.” Add to that any kind of disability, and “it can feel very daunting.”

In Tennessee, Knoxville couldn’t get hormone replacement therapy (HRT), so had to travel across state lines to a Planned Parenthood clinic in North Carolina to start the work of his transition.

After hearing stories of dysphoria, depression, and isolation from people in similar circumstances in East Tennessee, Knoxville was inspired to organize the first event of what would become the Trans Empowerment Project (TEP): a clothing swap, offering trans folks a free, gender-affirming event with music, speakers, and like-minded community.

Since that night in 2016, TEP has grown to be one of the largest providers of aid and programming for the trans community in the United States, with three main areas of focus: the group provides access to “basic needs” in the form of direct aid for emergency food, gender-affirming clothing deliveries and transportation to safe shelter, among other services; they sponsor an inmate advocacy program which provides commissary and care packages, gender-affirming undergarments, and legal assistance and help with job placement after release; and the Take Back the Narrative program, a storytelling initiative designed, in Heather’s words, to “amplify the stories of folks in this community, the struggles they face, the joys they find, and take back the mic” from “the GOP and right-wing extremist painting the trans community as dangerous or delusional or predatory.”

A few years before he transitioned, Jack was on a job in Myrtle Beach, North Carolina, photographing dancers at a club there, when he was introduced to Heather for the first time.

“Jack was very nervous when we met,” she recalls, “and I was just very bold, and was like, ‘Are you gay or bi or anything because I think you’re really cute.’ And that just kind of went from there.”

The two dated for a minute, but life got in the way. “Neither of us was in the best living situation,” says Jack. “She had gotten off work one day only to find out that her mom had gotten them kicked out of the hotel they were living in. And so we got separated. We were separated for 13 years.”

In 2019, as Heather was exiting an abusive marriage, Jack had found stability. “You know, I got my house, my job, my car, my dog,” Jack thought to himself on the day he moved into his new place. “Now I just need my girl.”

Soon enough, Heather was all in with Jack, and TEP, as well, where she’s now the communications and fundraising director.

Heather says Jack has enabled her “to really learn and grow in the spaces that I wanted to. And he has done that for everyone on the Trans Empowerment Project team who has shown interest in growing their skills and maybe learning something that doesn’t really align with what they had been doing previously. A lot of the folks who are on our paid staff now were people who came in as volunteers with not a whole lot of experience, but a lot of passion for the community and what we were doing.”

Those providing the services at TEP are just as important to the project’s mission as the clients, says Jack, and the foundation of an even more ambitious goal.

“The bigger focus for us is not on structural change, as much as it is cultural change,” Jack says. “Anybody with a big enough eraser can come along and get rid of that structural change. But what you cannot change so quickly is that cultural change. If we could, white supremacy wouldn’t exist, but it does, because these are the cultures and behaviors that have been handed down for generations. But the future hasn’t been built yet,” he says.

“We’re building the future right now. And it’s really just about helping to empower everybody who comes across this organization and to help them realize that no matter what your past is, no matter what your story has been, you have the ability to write it from here on out. How do you want to show up?”

The queer zine that brought “dykedom” to the forefront in India