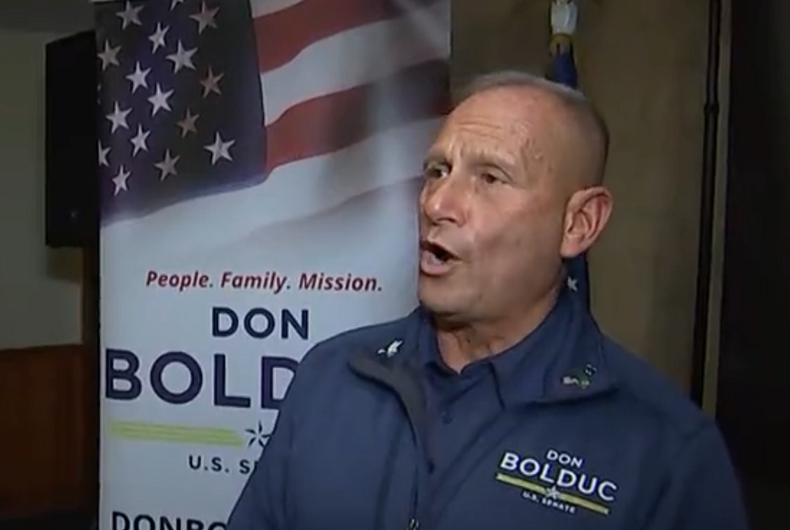 A New Hampshire Republican is refusing to back down from a claim that schools are installing litter boxes for students who identify as animals to use.

“They’re putting litter boxes,” Don Bolduc, who is running for the U.S. Senate, said at a campaign event last week. “These are the same people that are concerned about spreading germs. Yet they let children lick themselves and then touch everything. And they’re starting to lick each other.”

He went on to say that this is happening at schools in Claremont and Derry, New Hampshire. He also mentioned Pinkerton Academy, a private high school in Derry.

This led to the school speaking out: “It has come to our attention that at a recent event in Claremont Don Bolduc named Pinkerton in false claims suggesting that unhygienic, disturbing practices are taking place in our classrooms and spaces on campus…. We want to assure our community that Mr. Bolduc’s statements are entirely untrue.” The school invited all candidates to visit “so they can inform themselves.”

But Bolduc doubled down yesterday when a reporter asked him about the comments.

“I had a parent and a student in that audience who came up to me and told me all about it,” Bolduc claimed. “I’ve had that all across the state. So I’m only articulating what I heard from Granite Staters, parents and children.”

He went on to blame his opponent, incumbent Sen. Maggie Hassan (D-NH),

“Craziness is going on in our schools. Senator Hassan is responsible for it, she’s doubled down on all the bad education policies out there. So you should be asking her why our children can’t read and write at grade level, why we have the lowest scores, why we can’t compete in the world, why our children require remedial courses to go to college.”

The reporter pointed out that the school said that the story is “completely false.”

“They came out and said that they didn’t mask children,” Bolduc said, not naming a school that hid the fact that they had a mask mandate. He also said that schools lied about not teaching critical race theory, a movement of legal thought developed last century by Black law professors that says that racism is institutional in the U.S. and not just a result of individuals’ personal attitudes.

Schools say that “they don’t teach transgender, which they do,” Bolduc said. “I’m not backing down, OK? You’ve got the wrong guy. Just because they say it… they need to prove it. Prove it.”

NEW: Don Bolduc- only to @NBCNews says the school he accused of using litter boxes for children who identify as animals needs to "prove" the claim wrong.
He tells me a parent and a student told him it was happening and he is "not backing down." pic.twitter.com/s7CLx09uu2

Bolduc is only the latest Republican to buy the false story that schools all over the country are being forced to accommodate student-furries by installing litter boxes for them to defecate in. Last week, Sen. Ron Johnson (R-WI) said that he was “well aware” of the problem of schools letting kids use litter boxes.

The story is usually told in the context of LGBTQ students’ right to education, claiming that letting transgender kids live authentically has led to students identifying as animals.

One of the earliest examples of the rumor, which has been spread by anti-LGBTQ social media accounts like Chaya Raichik’s Libs of TikTok, was from a parent in Michigan who opposed allowing transgender students to use bathrooms that align with their gender identity. At a school board meeting in January, Lisa Hansen claimed that she had heard that students who identified as cats were using litter boxes in one school’s unisex restroom. The school board was forced to categorically deny Hansen’s claim.

According to Real Clear Politics, Hassan is slightly ahead in recent polls with a 2.3-point average lead against Bolduc.

We want to assure our community that Mr. Bolduc’s statements are entirely untrue. We invite all political candidates to speak with members of our administration or visit our campus so they can inform themselves about our school before making claims about what occurs here. (2/2)