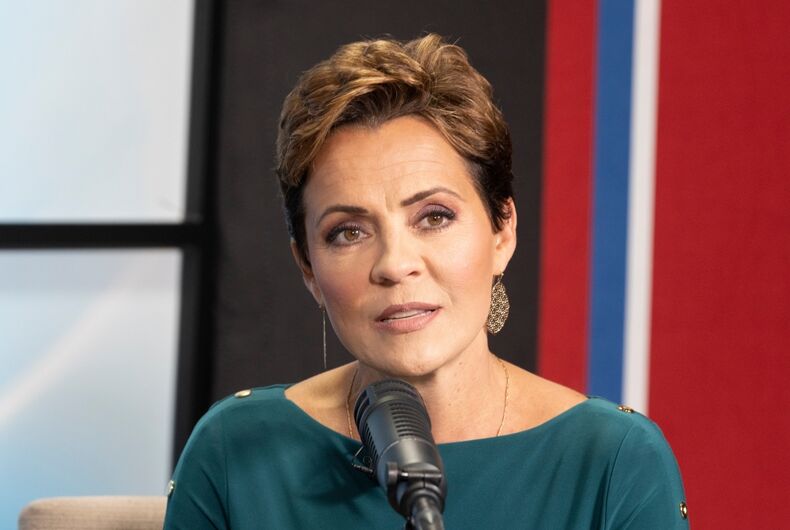 Kari Lake, the far-right election denier who ran for governor of Arizona as a Republican this year, has been declared the loser. Democratic candidate Katie Hobbs has 50.4% of the vote with 98% of precincts reporting.

And one drag queen has a special message for Lake.

Lake attacked drag queens as part of her campaign, writing on social media: “They kicked God out of schools and welcomed the Drag Queens. They took down our Flag and replaced it with a rainbow. They seek to disarm Americans and militarize our Enemies. Let’s bring back the basics: God, Guns & Glory.”

Richard Stevens – who performs as Barbra Seville – took issue with that, calling Lake a “complete hypocrite.” She said Lake was a regular in the Phoenix drag scene and even hired Barbra to perform at a baby shower.

“[Lake has] come to my parties and has been asked to leave because door people thought she was too intoxicated to remain on premises,” Stevens wrote on social media.

Lake somewhat denied the allegation, saying that she just went to an event where Barbra was a “Marilyn Monroe impersonator” and “it wasn’t a drag show.” Lake’s lawyer sent Barbra a cease and desist letter.

After a week of counting votes in Arizona, Lake has been declared the loser of the election. Barbra posted a photo of herself to Facebook with the words: “Tell Kari, I want her to know it was me – Barbra Seville.”

The message is a reference to Game of Thrones, where Olenna Tyrell told Jaime Lannister, “Tell Cersei, I want her to know it was me,” in reference to her having murdered Jaime’s and Cersei’s child. It was her last line before being killed.

Despite major media outlets declaring Hobbs the winner, Lake has not yet conceded. This may just be part of her brand; Lake got national attention by falsely claiming in 2020 that Donald Trump had actually won the election but that President Joe Biden stole it in a vast election fraud conspiracy of which no proof was found. She hasn’t disavowed that position, and, two years later, Trump still hasn’t conceded. Trump went so far as to tell his supporters to march to Congress in a speech just before the January 6 Capitol Insurrection.

The Washington Post reports that Lake’s team has been in talks about how she should publicly take a loss. She has spent years making false claims about election fraud in the state.

“Nobody is advocating to go storm the castle,” one person familiar with the discussions told the Post, saying that there was a lot of “anger” during the discussions about Election Day process.

Hobbs, though, isn’t waiting for Lake to concede to accept victory.

“Democracy is worth the wait. Thank you, Arizona. I am so honored and so proud to be your next Governor,” she tweeted late last night.

Democracy is worth the wait.

I am so honored and so proud to be your next Governor. pic.twitter.com/O6ZFSHbIBe