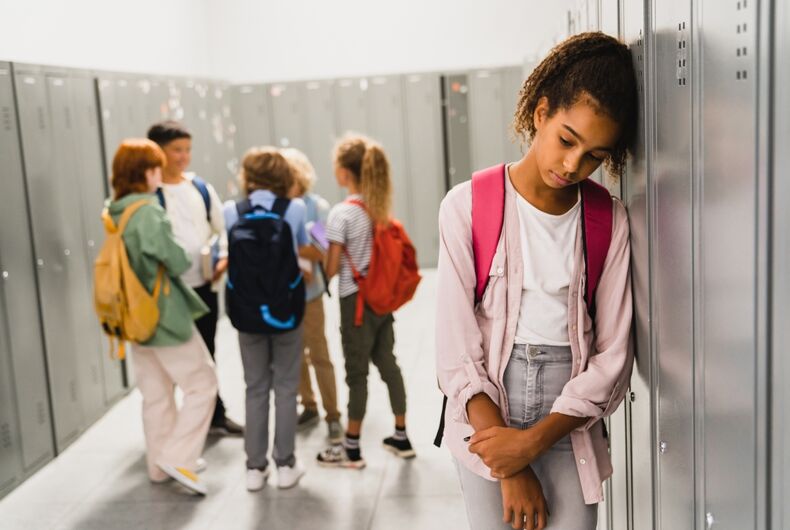 Across Florida this new school year, rainbows, safe space stickers and books with LGBTQ themes and history are being replaced in classrooms out of fear.

The Parental Rights in Education Bill – called the Don’t Say Gay bill by its opponents – was signed into law by Republican Gov. Ron DeSantis in March. It’s had a chilling effect on students, teachers and free speech across the state. Anything deemed political, with LGBTQ subject matter in the bullseye, is being torn down, boxed up and otherwise removed from campuses. Black Lives Matter posters are leaving along with rainbow flags.

Gail Foreman, a longtime social studies teacher at Booker High School and a lesbian, says her principal didn’t wait for the law to take effect before conducting an inventory of inappropriate materials last March. “Anything that could even remotely be construed as gay-related came down,” Foreman told Buzzfeed News. “It wasn’t me putting this stuff up,” she said. “It was the kids. It was their classroom, too.”

Among the items removed were student-created posters reading “All Students Deserve Equal Education” and “All Minds Matter”; pride flags; a pride cape gifted by a student; safe space stickers from the Trevor Project; and a Mickey Mouse pen topped with a rainbow head. “Rainbows now symbolize politics,” Foreman said.

Senior Nora Mitchell, who founded Sarasota Students for Justice in 2020, says the Don’t Say Gay law has “allowed the Sarasota County School Board to create new policies that are, for lack of better words, extremely repressive within our school.” That school board now includes three new DeSantis-endorsed members, two of whom celebrated their victory in August with members of the neo-Nazi group, Proud Boys. One flashes a white power sign in a photo published by Vice News.

Mitchell, who came out to friends and teachers just before Don’t Say Gay was signed, says two banners she created were taken down and thrown away. One read, “Black Minds Matter,” and the other said, “We are all welcome here” and was decorated with rainbows. Officials “want school to feel unsafe,” says Mitchell, “and they want schools to be spaces where they can impress their own values of heterosexuality of whiteness. They want to reaffirm those values.”

Mitchell and 2021 graduate Anthony Frisbee add that it’s not just school administrators tracking down violations. “Students have reported about teachers who are wearing anything rainbow-related,” says Mitchell. “It’s horrible.” In Frisbee’s view, “It’s like the Hitler Youth outing their parents.”

“You feel the sense of danger — like, school does not feel safe. It does not feel as vibrant as it was before,” Mitchell says. “Teachers can’t teach what they want, they can’t call students by their actual name, students are scared to be themselves at school. I mean, how can that possibly be conducive to learning or be a welcoming and fun place?”