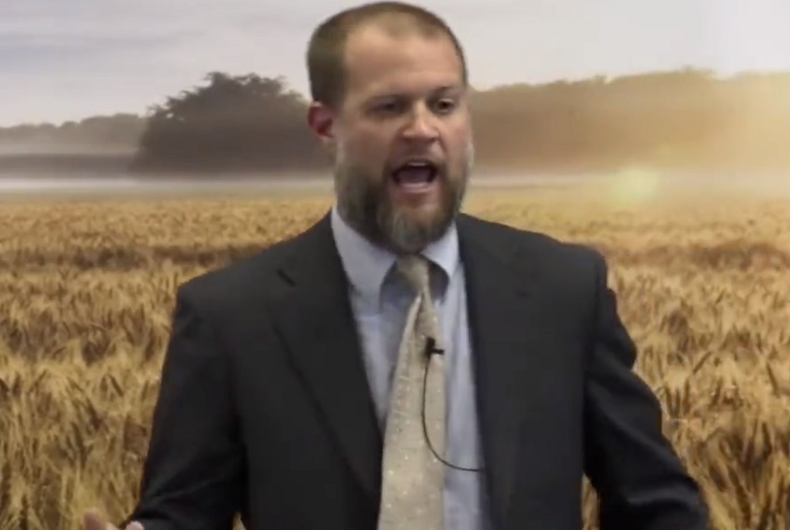 Brother Tanner Furrh of the Stedfast Baptist Church in Watauga, Texas explained in a sermon why he uses anti-LGBTQ slurs instead of just saying that gay people are condemned to hell.

“If I stand up and I tell you, ‘You should treat the homosexual with honor and dignity,'” he said, mocking other homophobic churches’ “Love the sinner, hate the sin” stance. “Does that make you want to hate that person in your heart? No.”

“But if I get up here and I say, ‘Every fa***t is a pedophile, they are a child molester, they are an abuser,’ guess what?  That instills a little bit of hatred. In fact, you’ll grow to have a perfect hatred for the enemies of God.”

Christian hate-preacher Tanner Furrh says he uses anti-LGBTQ slurs because he wants you to "hate that person in your heart."

"Even though it doesn't sound good… it's actually benefiting the Spirit." pic.twitter.com/mWeU63QkOQ

Furrh’s words come as Republicans have spent the past year doing just that, calling LGBTQ people and their allies – especially doctors and teachers – “groomers,” referring to how child sex abusers lure children.

Stedfast is part of the New Independent Fundamental Baptist Movement, a set of churches that focuses heavily on hatred of LGBTQ people. Steven Anderson’s Faithful Word Baptist Church is a part of the movement.

Furrh has previously called for death to lesbians, saying that “a bullet in their head is too nice.”

“They’re sick and gross because the Bible says so,” Furrh said in June. “And not just the male fa***ts. Also the women-fa***ts too.”

“All the lesbos, all the dy**s, all these butch dy**s out there, they deserve the death penalty too,” he continued. “It should be punished with death by the government.”

Stedfast is the same church where Jonathan Shelley preaches. Last month, Shelley claimed that gay men’s “intestines will sometimes just fall out because of the actions that they do.”

“Pastor Shelly, you’re gonna have to eat Indian food and ranch dressing every day of your life, or do that one time?” he said, referring to sex with other men. “It’s like, bring on the Indian food.”

“What if you, what if you, Pastor Shelley, what if you had to eat Indian food and ranch and then vomit it up and then eat it again, or do that one time? It’s like, bring on the vomit.”

Shelley also expressed doubt that six million Jewish people were killed in the Holocaust this past month, saying that he would feel “lucky” if that happened, just how he would feel “if someone walks into a homo bar and shoots ’em all, shoots a bunch of homos and kills all of them.”

Gay penguins are back together just in time for mating season