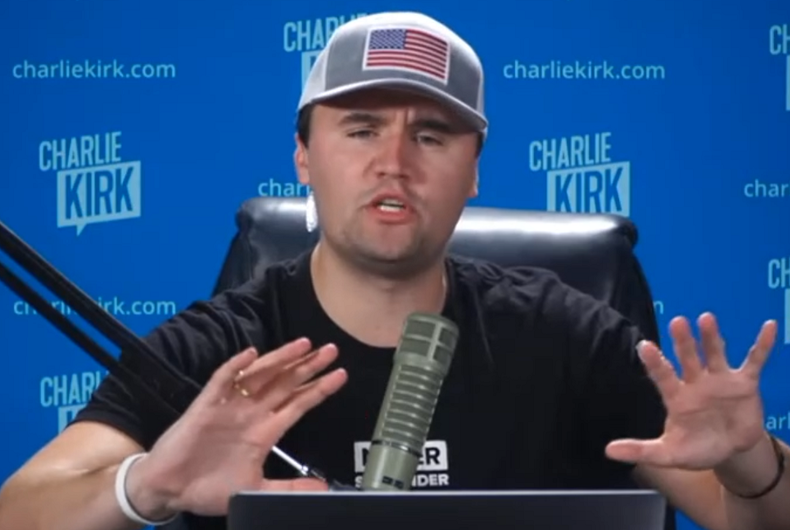 Anti-LGBTQ activist and Turning Point USA co-founder Charlie Kirk asked his listeners to bail David DePape out of jail so that the LGBTQ community of San Francisco can be blamed for the attack on House Speaker Nancy Pelosi’s (D-CA) husband Paul Pelosi.

Last week, DePape was arrested in connection with the attack on Pelosi, allegedly breaking into the Pelosis’ San Francisco home and asking “Where’s Nancy?” before beating the octogenarian with a hammer. DePape later reportedly told police that his plan was to break Nancy Pelosi’s kneecaps so that she would “be wheeled into Congress, which would show other members of Congress that there were consequences to actions.”

Investigators said that Paul Pelosi woke up to find DePape in the room with him and that DePape entered the home carrying zip ties, tape, rope, a pair of rubber and cloth gloves, and “at least one hammer. DePape compared himself to the “American founding fathers with the British.”

DePape’s social media history shows that he believed in numerous conservative conspiracy theories, like QAnon, that the COVID-19 vaccines kill people, and the idea that the war in Ukraine is a plot for Jewish people to buy land. He also shared images mocking transgender people. He shared links to YouTube videos with titles like “Democrat FARCE Commission to Investigate January 6th Capitol Riot COLLAPSES in Congress!!!” and “Global Elites Plan To Take Control Of YOUR Money! (Revealed)”

Now Kirk wants to prove that DePape is actually a “gay schizophrenic nudist,” a reference to the rightwing online evidence-free rumor that DePape was actually Paul Pelosi’s lover or a sex worker hired by Paul Pelosi and that he was in his underwear when police arrived.

He then asked his listeners to post bail for DePape, saying that whoever did that would be “a midterm hero.”

“And why is he still in jail?” Kirk continued. “Why has he not been bailed out? And by the way, if some amazing patriot out there in San Francisco or the Bay Area wants to really be a midterm hero, someone should go and bail this guy out.”

“Bail him out, and then go ask him some questions.”

Over the weekend, Twitter owner Elon Musk shared an article from the far-right Santa Monica Observed that contained a detailed and mostly fictional account of the attack that claimed DePape and Paul Pelosi met in a gay nightclub. Musk later deleted the tweet, but many on the right appear to still believe that the story had some validity.

Charlie Kirk calls for his audience to post bail for Pelosi attacker: "If some amazing patriot out there in San Francisco or the Bay Area wants to really be a midterm hero, someone should go and bail this guy out…Bail him out and then go ask him some questions" pic.twitter.com/EkMqFIYUn1

On Twitter, Kirk repeated many aspects of the false story, saying that Paul Pelosi referred to DePape as his “friend” when talking to police, that DePape was arrested only wearing his underwear, and that the attack was a “smear” of “millions of conservatives” and not an attempted murder or an attempted violent attack on a public figure because of her political beliefs.

Why did Paul Pelosi call his attacker his “friend”?

Why was he wearing underwear?

Who let the police into the house?

Why haven’t we seen the security or body cam video?

Or is it just more convenient to smear millions of conservatives?

Kirk has a long history of anti-LGBTQ rhetoric. Earlier this year, he said that the transgender rights movement wants to turn all people into machines.

“The transgender movement is an introductory phase to get you to strip yourself of your humanity to mesh with machines,” he said.

“It’s called trans humanism. They want you to say, ‘ok, well I can choose any gender, why can’t I just have an exoskeleton of some sort of machine around me?”

“This is why they’re so insistent on this transgender thing,” he said. “Because if you stop being a man, then maybe you can stop being a human being. Maybe you can just plug into some sort of machine.”

In April, Kirk blamed inflation on transgender people because “you do not get to determine your own reality.”

“So there’s a direct connection to inflation and the trans issue,” he said. “You say, ‘Charlie, come on. They couldn’t be further apart.’ No, they’re exactly the same.”

Also in April, Kirk said that LGBTQ people want to “corrupt your children.”

“The opposite is that gay marriage happens and we’re talking about gay stuff more than any other time. Why? Because they are not happy just having marriage. Instead, they now want to corrupt your children,” he said.

Daniel Radcliffe explains why he had to speak out against J.K. Rowling’s transphobia