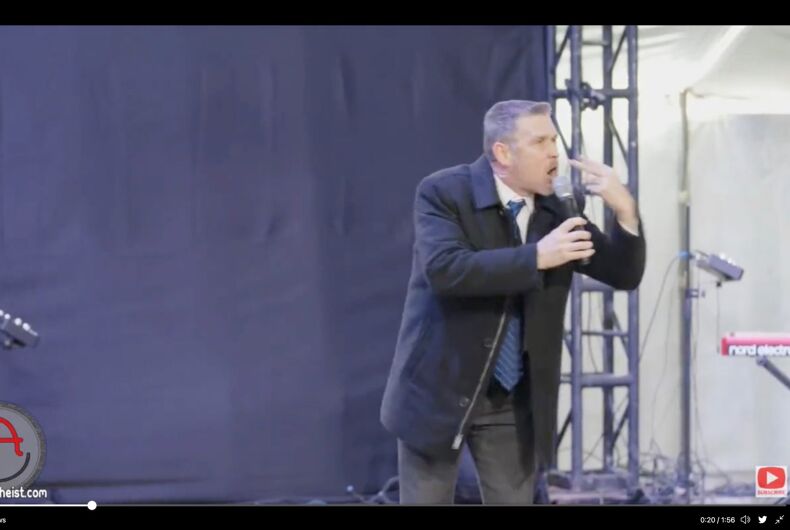 “Every time demons speak in the Bible, they always make an emphasis out of their pronouns,” he said as the congregation cheered. “It’s what demons do!”

“What’s your name? Oh it’s singular? That’s cool,” he said, acting as if he talks like that when he meets people. “How do you want me to address you?”

“Us, they, them,” he responded, pretending he was trans.

“You see it’s been demonic for 2000 years and y’all wanna play games with ’em!” he shouted at the congregation. “Taking your kids on that stupid, wicked nonsense.”

“Us, we, they, them, you born with what you born with,” Locke said. “You a man or a woman, that’s it. Anything else is demonic! It is evil, it is perverted, it is wicked, and it is a plan, and a plot, and an attack of the Enemy on our children, stop playing these stupid games.”

He is also known for his outlandish performance art. Two years ago, he held an Easter service where his son reenacted the crucifixion.

Earlier this year, he held a literal book burning to “deliver” his flock from demons by burning books like the Harry Potter and Twilight series.

During that book burning, a gay man threw the Bible into the fire and shouted “I burned the Bible” and “Praise Satan” several times.

Locke has also claimed that he found six witches who infiltrated his church.

“You better look in my eyeballs, ’cause we ain’t afraid of you, you stinkin’ witch, you devil-worshipping Satanist witch,” he said during a service in February. “We cast you out in the name of Jesus Christ. We break your spells, we break your curse. We got your first name, we got your last name, we even got an address for one of you.”

He did not name the witches.