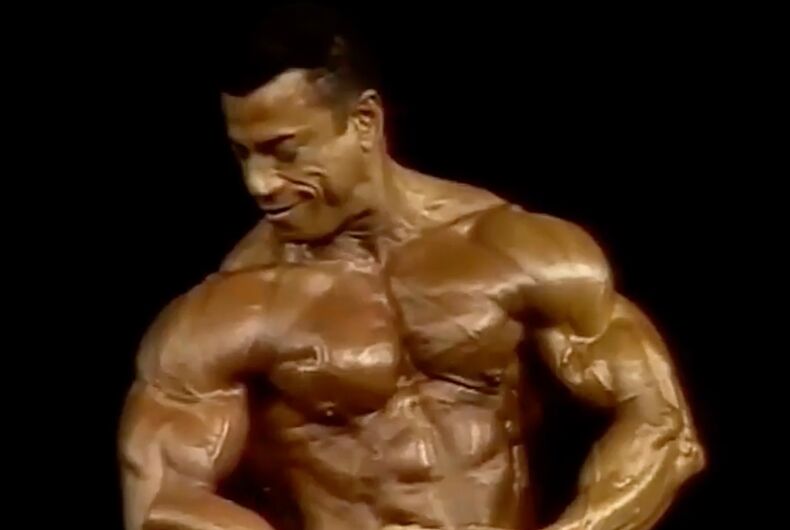 In 2014, trans man Neo L. Sandja put on the first bodybuilding competition for trans people, a project that eventually blossomed into the International Association of Trans Bodybuilders and Powerlifters (IATBP). Founded to create a safe and competitive environment for trans bodybuilders, spaces like this one are needed because the toxic masculinity of mainstream bodybuilding continues to de-center the queer people who not only nurtured the culture but continue to support it through participation and funding.

Bodybuilding, in fact, has always been a queer sport.

There is an ever-growing number of transphobic policies being passed in the United States and abroad, and trans athletes in particular do not have a safe and affirming space to compete openly. While our community is under attack, the IATBP intends to continue pushing back. pic.twitter.com/umeyppODfR

The word gym derives from the Greek gymnos, meaning nude — the preferred state in which ancient Grecians exercised. Thus, their open-air, guys-only gymnasiums hosted sports of the implicitly homoerotic variety. And these nude wrestling sessions were probably to thank for some of the explicit unions between older men (erastes) and their younger partners (eromenos). It’s here that men built the kinds of physiques immortalized in marble.

Resurrected from obscurity during the Greek Revivalist movement, these statues found new life in the 1800s. Inspired, a young Prussian boy named Friedrich Wilhelm Müller trained to build his body to resemble these forms, eventually finding international fame as a strongman under the stage name Eugen Sandow. Until Sandow hit the scene, muscles were only for ugly, lower-class citizens – laborers upon whom the gods of industrialization had yet to smile. Sandow embodied the marriage of upper-class beauty and lower-class strength. Additionally, he very likely was bisexual.

Although historians disagree on the nature of his relationship with longtime friend Martinus Sieveking, Sandow at the very least demonstrated ultramodern tolerance of numerous gay painters and social figures for whom he posed and who helped him achieve success. This Victorian strongman revealed exercise as a means of achieving an aesthetic ideal. This idea is the very backbone of bodybuilding.

As notorious aesthetes, many gay men naturally gravitated to a performance art like bodybuilding, particularly since a strong and beautiful man uniquely sits at the intersection of what they desire and what they desire to be. Thus, when bodybuilder Charles Atlas began advertising fitness routines in national publications in the 1930s, he unwittingly propagated the sport of bodybuilding to straight as well as queer men.

“Bodybuilding” soon took on a double meaning for gay men seeking likeminded penpals in fitness magazines. Yes, their ads indicated a passion for weightlifting, but they also might very well have meant the same thing as “sensitive.” Perceiving the presence of others like him, a SoCal physique photographer named Bob Mizer began publishing Physique Pictorial, the first beefcake magazine and what appears to be the first magazine made for gays, by gays.

In addition to helping establish an informal gay community, this burgeoning industry of physique magazines served as launchpads for famous, homoerotic artists like George Quaintance, Lon of New York, and Tom of Finland. Their artwork portrayed gay men beyond the effeminate, waiflike dandy stereotype of yesteryear.

Tom of Finland’s artwork particularly challenged public preconceptions by portraying muscular, often mustachioed gay men in traditionally hypermasculine roles like soldiers, policemen, and lumberjacks. Tom’s work would later help catapult leather culture into the zeitgeist as well as pave the way for the Castro clones (gay men who channelled this amalgam of hypermasculine aesthetics and queer sexuality) to see themselves represented in public celebrities like Freddie Mercury and the Village People.

But in the 1950s, this homoerotic media helped blend the concepts of bodybuilding and queerness until even the cis, straight public struggled to separate them, resulting in fitness tycoon Joe Weider actually publishing content that subtly catered to gay readers in his mainstream bodybuilding magazines; a choice which fellow tycoon Bob Hoffman publicly decried by publishing an article that maligned Weider for pandering to the ‘“fairy’ trade”

This integration of queerness and bodybuilding precipitated the downfall of Santa Monica’s famous Muscle Beach. As Jonathan Black explains in Making the American Body, “The notion of a robust masculinity so flagrantly displayed on the sunny sands had come to seem limited, if not suspect. Men who shaved their bodies and posed in tiny tight trunks no longer seemed quite so iconic in a sexually liberated culture. There were hints of homosexuality and the occasional charge of promiscuity.”

Perhaps this heightened visibility of queerness in stereotypically masculine spaces triggered the U.S. government’s increasingly homophobic actions during the late 50s and early 60s. Around the same time that President Eisenhower established his President’s Council on Youth Fitness to prepare tomorrow’s soldiers for the war against the communists, government entities like the Department of Defense were firing alleged homosexuals in a wave that historian David K. Johnson calls the “Lavender Scare.”

Schwarzenegger’s meteoric celebrity shifted the bodybuilding lens away from queer men, making it seem like a straight man’s sport. In the documentary adaption of Pumping Iron, Schwarzenegger even famously compared the euphoria of achieving a pump in the gym to “having sex with a woman and cu***ing.”

Perhaps nothing better exemplifies this shift in public perception than the controversial 1980 Mr. Olympia contest, in which the crowd booed when the judges crowned Schwarzenegger (fresh out of retirement and presenting an asymmetrical physique) over the gay frontrunner, Chris Dickerson. Dickerson also encountered racism as the first Black Mr. America; this, in addition to homophobia, likely contributed to his waiting until retirement to publicly come out, although his queerness had always been an open secret in the bodybuilding world.

As the AIDS epidemic ravaged queer populations of the 80s and 90s, some HIV patients found a glimmer of hope in the gym. Physicians discovered that anabolic steroids helped patients put on indispensable, lean muscle mass that helped their body fight off the dreaded and often fatal effects of wasting syndrome, giving rise to the so-called “Poz Jock,” as Erick Alvarez writes in Muscle Boys: Gay Gym Culture. In 1989, when Oprah invited gay bodybuilders Bob Paris and Rod Jackson onto her show and asked Paris why he came out now, he cited his newfound love for Jackson; but maybe he chose then to come out publicly as an act of solidarity with his ill brethren.

Nowadays, some health clubs exclusively cater to queer clientele, serving as temples of exercise, forums of socialization, and the setting for many a hookup (although the YMCA, famously, was the first). Social media offers yet another platform through which legions of gay bodybuilders celebrate physical exercise and a classical notion of beauty.

Although it continues to be dampened, the truth remains: Bodybuilding is a queer sport.

Marjorie Taylor Greene says Joe Biden can’t define what a woman is, but she can’t even spell it