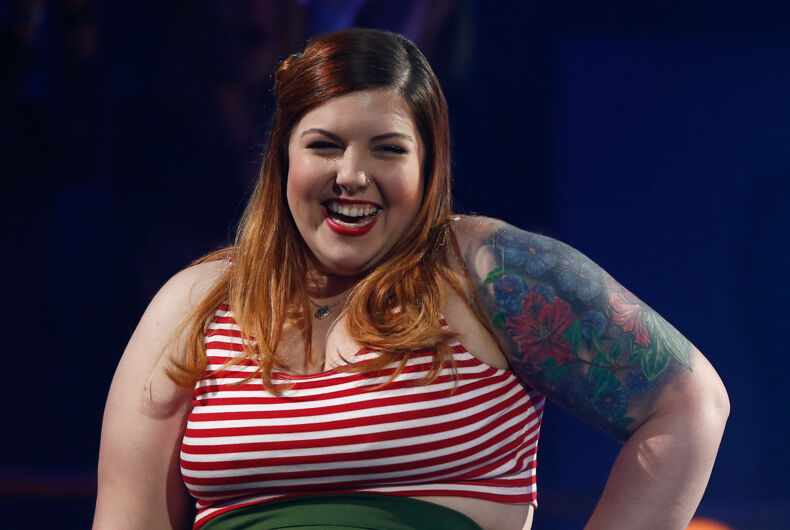 Singer Mary Lambert and partner Wyatt Paige Hermansen tied the knot over the weekend. The ceremony, which took place in Oakland, Maine, on October 22, took advantage of the New England setting for a warm autumnal vibe.

The couple, who have been together for over four years, shared their wedding photos with People Magazine.

As Lambert and Hermansen, who is a professor, explained that they eschewed traditional wedding party labels in favor of more playful, queerer, and less gendered roles. They dubbed themselves the “bride and broom,” with “broomsmaids” and “bridesbabes” replacing groomsmen and bridesmaids, and “captain” and “president” instead of a maid of honor and best man.

“We thought it was really cute and funny,” Lambert said. “We were trying to find other couples like us in bridal magazines and I just didn’t see it. I know they’re out there, but it has felt a little constricting, a lot of the gender dynamics… There’s a lot of things we’ve been pushing against, and one of those was our wedding party.”

The couple, who co-host the podcast The Manic Episodes together, also shared queer perspectives on marriage.

“It’s really common for queer people to be really cynical about marriage,” Hermansen said. “But when I met Mary, she was just as starry-eyed about the idea of getting married as I was. She had the whole fantasy in her heart and it just meant so much to me to meet somebody who I could see myself with in that way.”

Following the release of the wedding photos, Lambert posted about the big day on Instagram. “This wedding was literally dreamier than my actual dreams—to the point where I almost refused to take my dress off (bridezilla much??),” she wrote in a post thanking everyone who helped bring the couple’s dream wedding to life.

“I’ve dreamt of this moment my whole life. We’re gonna get married in front of god and everybody!!!!!” she captioned the November 2021 post.

Herschel Walker just gave the worst definition of a “man” yet