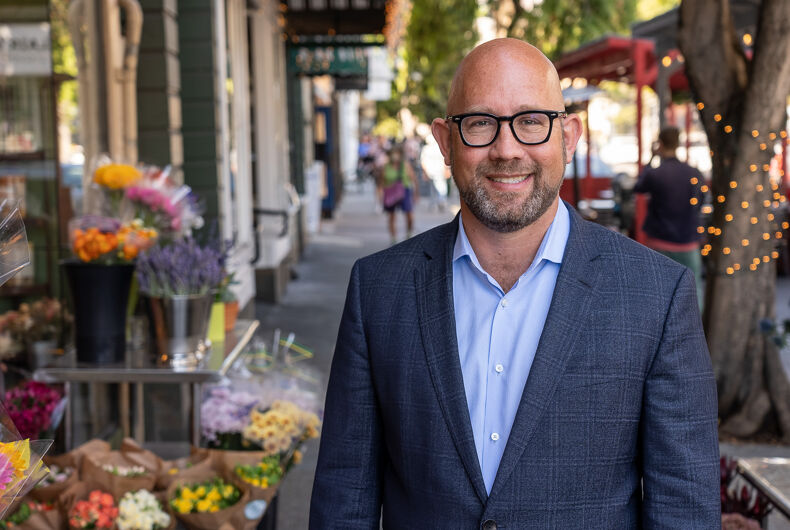 San Francisco’s out gay District 8 Supervisor Rafael Mandelman (D) was up early on an overcast Sunday morning in the City. The day would consist of an interview, followed by a round of constituent meetings at his favorite coffee spot, Spike’s, and then, as the fog lifted and the hoodies came off, a day of campaigning for reelection and neighborhood glad-handing on a sunkissed afternoon at the Castro Street Fair.

It was all in a day and night’s work for a man who says he’s “single and dating the people of the City and County of San Francisco.”

It was at Jewish day school, he says, “that I first really began to have an understanding of the imperative of tikkun olam, our obligation to engage in the work of repairing the world, which has definitely been an important influence in defining my life pursuits.”

Mandelman, 49, lived with his mother until age 11, when her deteriorating mental health proved incompatible with raising a precocious child; he moved to San Francisco to live with his maternal grandmother, a Holocaust survivor.

Parenting proved taxing for her as well, so in middle and high school, he was taken in by a succession of teachers. “I got very good at asking people to take me into their homes,” says Mandelman. “And they did.”

Mandelman’s resume belies his itinerant upbringing. A scholarship took him to Yale University, where he earned a B.A. in History, then a Master of Public Policy from Harvard’s John F. Kennedy School of Government and a J.D. from UC Berkeley’s School of Law.

After going head-to-head with current California state Senator Scott Weiner in 2010 and losing, Mandelman won election to his current office as Supervisor for San Francisco’s District 8 in 2018, representing the LGBTQ Castro area and surrounding neighborhoods.

It’s the seat that brought martyred LGBTQ activist Harvey Milk to national prominence in 1977, as one of the first out elected officials in the country. The next year, Milk was shot and killed, along with San Francisco mayor George Moscone, by Milk’s fellow supervisor Dan White.

Upon taking office, Milk sponsored a groundbreaking bill banning discrimination in public accommodations, housing, and employment in the city based on sexual orientation. It passed the Board of Supervisors 11-1 and was signed into law by Mayor Moscone, cementing San Francisco’s reputation as a gay mecca. Dan White, Milk’s assassin, was the lone dissenting vote.

Asked if it’s difficult living up to Milk’s legacy as the occupant of his former seat, Mandelman answers without hesitation: “That’s impossible.”

While both men could be described as determined, no one would mistake Mandelman for theatrical. Where Milk was inspiring, his successor is studied, evincing a lawyer’s appraisal of the facts before deciding and moving toward an appropriate, and achievable, solution – the hard work of “repairing the world.”

In four years as supervisor, Mandelman has a lot to show for his efforts. In 2019, he authored a declaration of climate emergency in San Francisco, which the Board of Supervisors unanimously passed.

The following year, the Board adopted Mandelman’s All-Electric New Construction Ordinance, phasing out natural gas in new residential and non-residential construction in the City, where buildings account for 40% of carbon emissions.

In 2020, the Board passed legislation Mandelman co-authored requiring San Francisco International Airport airlines and contractors to provide free health for workers. And in 2022, Mandelman’s “A Place for All” ordinance was passed unanimously, making it official City and County policy to offer all homeless people a safe place to sleep, while moving toward a more sustainable solution to a seemingly intractable problem.

According to Mandelman, San Francisco spends more than half a billion dollars annually to house the homeless by various means, “and yet our sidewalks and public spaces look as bad as they ever have.”

San Francisco’s crisis in affordable housing reaches beyond the homeless, and back to the wave of gay immigration that brought Harvey Milk to the City.

It’s “the fairly heartbreaking part of the reality of the people who were part of that Queer Greatest Generation, who came to San Francisco in the 70s, in the 80s, into the 90s, and are in their rent-controlled units, who are at high risk of displacement,” says Mandelman.

“The district I represent has the second highest rate of no-fault evictions in the city. And so these folks who are now in their 60s ,70s, or older are in fear of being evicted. If they’re evicted, it’s not just eviction from their home, it’s often eviction from San Francisco.”

Mandelman worked with Mayor London Breed to acquire property in the district for 180 units of LGBTQ-affirming senior housing. “We’ve done that with two prior buildings in that area,” says Mandelman, “so that’s a good thing. We only need like 15 or 20 more of those buildings,” he says with a touch of irony, “and then maybe we’ll have met the need.”

The supervisor professes ambivalence about his opponent in the race for D8, Kate Stoia, a real estate developer and newcomer to politics, whose policy positions could be mistaken for the supervisor’s own. “I spent two decades doing things in San Francisco political and civic life before I won a seat on the board, but that doesn’t mean I did it the right way,” he says smiling. “Maybe she knows something I don’t know.”

Mandelman does know he’s blessed to make his life’s work in the City he grew up in.

“It is a stunning place, you know, on this peninsula, by the Bay, next to the ocean with these hills. Whatever you put on top of that was gonna end up being pretty amazing, and what has gone on top of that, in terms of the diversity of cultures and different kinds of people and the communities that have been here, you know, that made it even more special. I think that we’re very lucky to live in a place as beautiful as this.”

Coming out is important. But no one should be forced out before they are ready.