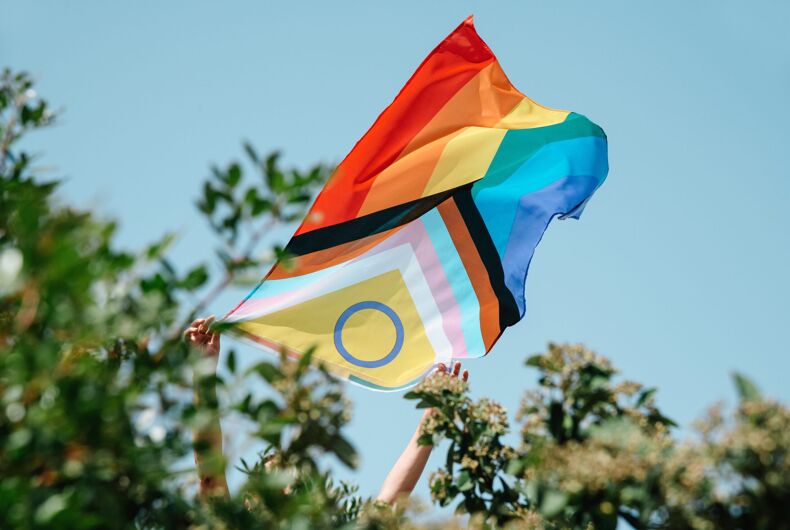 A Chicago couple whose home has been repeatedly vandalized by a Trump supporter is combatting hate with love.

Erica Hungerford and Peter Charnley rallied their community last weekend to create a massive display of LGBTQ Pride on their garage.

The couple has refused to be intimidated by a man who has repeatedly destroyed their Pride flags and left them threatening MAGA messages at their home in the city’s Jefferson Park neighborhood, where they have only lived since February.

The couple was joined by about a dozen members of their community on Sunday to paint a rainbow mural on their garage door that would cover up the perpetrator’s vandalism and send him a message that they refuse to let his hatred win the day.

Hungerford told the Chicago Tribune that she was “astonished at the number of people who wanted to help.”

Photos of the project depict a massive “Love Wins” message on the garage door, as well as rainbow-painted panels on the side of the structure.

In addition to their friends and neighbors, members of the Chicago Police Department also showed up to help. The department’s Facebook page posted photos of the officers painting and declared, “Hate has no place in Chicago.”

The couple has endured five separate anti-LGBTQ incidents since May, all of which they believe were perpetrated by the same man.

In the first incident, he cut up their Progress Pride flag that was on display. The couple knew it was an anti-LGBTQ act because the perpetrator left their Michigan flag and only destroyed the Pride one.

After that, they set up a Ring doorbell camera, which recorded the perpetrator returning to destroy the new Pride flag they had put up.

Over the next several months, they found a banana on the porch that had “Republic” on the peel, a “Let’s Go Brandon” sticker on their garage, and messages proclaiming: “Bidens Clintons for jail”; “Obama for prison”; “Impeach Biden”; and “Hack Harris.”

“I heart MAGA” was also painted onto their garage and their Pride flag was spray painted – even though they had hung it on a higher pole to try to keep it out of reach.

The man even waved to them on their security camera before cutting up their Pride flag over the Fourth of July weekend. Photos obtained by Block Club Chicago show the masked man in a zip-up waving.

The harassment got the attention of out Chicago Mayor Lori Lightfoot (D), who tweeted in support of the couple and said she was “outraged that this family has endured this hateful and bigoted attack.”

I am outraged that this family has endured this hateful and bigoted attack. As a proud member of the LGBTQ community, I cannot help but put myself and my family in the shoes of this family who has been the subject of biased, hateful, and cowardly acts.🧵https://t.co/SRr1lpau4T

“It’s stressful, it’s anxiety-inducing, it’s infuriating,” Hungerford told the Tribune. “I’m glad that we are able to not back down. At this point, I have extra Pride flags at the house, so the same day that he vandalizes a flag, I go out and put another one out there because I’m not going to let him intimidate me.”

While the couple has only lived in the neighborhood since February, they say their neighbors have told them this situation is not typical of the area at all.

“This vandalism seems very out of character for the neighborhood,” said community resident Megan Dunning, who brought her two children to help paint the garage on Sunday. “This community supports their LGBTQ neighbors. Everyone should be welcomed. We’re not going to tolerate hate.”

Chicago victim advocate Dawn Valenti called the home “the most Prideful house in the city.”

“Everywhere you look, from the tree to the flag to the canopy, to the garage to the side of the garage. Everything says Pride. This hopefully shows this person, especially the mural, that love wins. That’s what it’s about. It’s about love and just loving each other.”