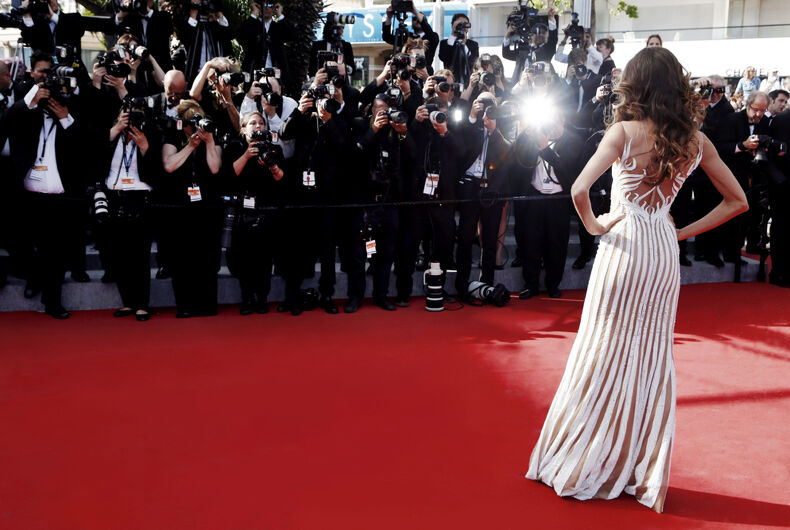 From the shores of Fire Island to the Dolby Theatre stage, a diverse group of celebrities this year proved “there’s a place for us.”

This year’s LGBTQ Nation Celebrity who Made Us Proud nominees are teen pop sensation JoJo Siwa, who became one-half of the first same-sex pairing in 30 seasons of Dancing With the Stars; reality television host RuPaul, who used his platform to speak out for LGBTQ rights and became the Black entertainer to win the most Emmys ever; actor Elliot Page, who brought transgender inclusion to both Hollywood and state legislatures; comedian and actor Joel Kim Booster, who put gay Asian Americans front and center with his movie Fire Island; and actor Ariana DeBose, the first queer woman of color to win an acting Oscar after she wowed the world with her performance in West Side Story.

At 10, little JoJo Siwa with the big ponytail Dance Mom’d her way into America’s hearts.

At 18, she melted them by coming out on Insta with a family member’s support: her t-shirt read “Best. Gay. Cousin. Ever.”

Last fall, Siwa wowed the country on Dancing With the Stars, tango-ing into history with ballroom dancer Jenna Johnson as half of the show’s first ever same-sex dance team on the long-running and immensely popular reality competition. They cha-cha’d home with silver.

She followed up in 2022 with a new gig as “judgey” on So You Think You Can Dance; ran a bell-ringing inside home run at Dodger Stadium for charity; ditched her iconic ponytail for a whole new look; got caught on the kiss-cam with her girlfriend; and explained why the word “lesbian” just isn’t her style.

Siwa is nothing if not herself.

That’s why, if you asked her, Siwa might say the most important thing she did over the last year was respond to a gay-baiting tweet with a speech at her concert in Columbia, South Carolina in March.

RuPaul must be doing something right: the host and executive producer picked up three more Primetime Emmy Awards last fall, bringing his lifetime total to 11, the most of any Black entertainer and producer in history.

Breaking from history, RuPaul brought more trans representation to reality TV on his show RuPaul’s Drag Race this past year than ever. Last fall, out trans drag queen Kylie Sonique Love was crowned the winner of season 6 of All-Stars. This year, five competitors on the latest season of RuPaul’s Drag Race were transgender, making it the most transgender season of the show ever.

RuPaul has been an outspoken advocate of LGBTQ equality on other platforms as well. He clapped back at Sen. Ted Cruz (R-TX) when he subbed for the host on Jimmy Kimmel Live this summer.

And when he won all his Emmys this year, RuPaul made sure that everyone knew that he did it by bringing LGBTQ culture to a wider audience.

“As the basic human rights of LGBTQ+ people are being threatened once again, I want to thank our peers in the Television Academy for acknowledging the achievements of the beautiful and talented souls that work in front of and behind the cameras at RuPaul’s Drag Race,” he wrote after his win. “We will never take for granted the platform we’ve been given to tell authentic queer stories, and pledge to do everything in our power to continue to spread light, love, and laughter.”

Actor Elliot Page, best known for Juno and now on Season 3 of his Umbrella Academy run, wasted no time after transition lending his voice to the fight for trans rights.

His first foray was speaking out directly, even politely, in a tweet to Montana legislators. That reasonable approach plus relentlessness become a template for his social media activism, challenging anti-trans laws in West Virginia, North Dakota, Tennessee, Florida and Texas. He joined a friend-of-the-court brief in opposition to an anti-trans legislation in Alabama enacted over the Republican governor’s veto, and threw his support behind the Dave Chappelle-inspired Netflix walkout.

He also helped bring more trans representation to the small screen. After he announced his transition, his Umbrella Academy character was reworked to provide the popular series with a deep and sensitive trans storyline.

“The night before we started shooting, I was like, ‘This is either going to change my life or it’s going to be the biggest flop of my career,’” Booster told The New York Times. “And I don’t think there will be anything in between that.”

While Booster was living in the city, holding down a day job and trying to make it as a comedian, he’d spend summer weekends on the island with mostly POC friends, and experienced first-hand a similar kind of social stratification he’d discovered in Austen’s Pride and Prejudice, plus the Meat Rack, poppers, and Sunday tea dance. It was a neat fit.

The comedian still isn’t sure about his prospects. “I don’t think it’s hit me quite yet,” he said. “I’m not getting Grindr messages about it.”

There was a lot of love and synchronicity in the room last March when 31-year-old actor Ariana DeBose, winner of the Oscar for Best Supporting Actress for her role as Anita in West Side Story, looked out from the stage and locked eyes with Rita Moreno. Trailblazing history was repeating itself.

Nearly 60 years to the week before, Rock Hudson presented Moreno, 60 years DeBose’s senior and also a daughter of Puerto Rico, with the same statuette for the same role in the same story at the same age.

“Rita Moreno. You’re staring at me right now. And I’m so grateful your Anita has paved the way for tons of Anitas just like me, and I love you so much.”

With DeBose’s Anita win, she added one more lyric to Oscar’s musical score: first out queer woman of color to win an Academy Award.

Debose continued from the stage, to cheers: “Imagine this little girl in the backseat of a white Ford Focus. Look into her eyes. You see a queer, an openly queer woman of color and Afro-Latina, who found her strength in life through art. And that’s what I believe we’re here to celebrate. So to anybody who’s ever questioned your identity, ever, ever, ever, or if you find yourself living in the gray spaces? I promise you this: there is indeed a place for us.”

Vote now for the 2022 LGBTQ Nation Hero of the Year