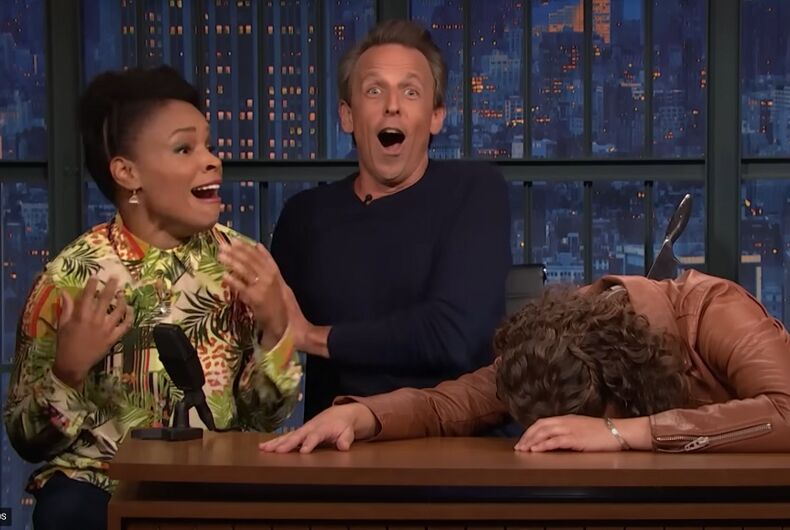 A segment on Late Night with Seth Meyers poked fun at the idea that LGBTQ television and movie characters are often killed off.

The “bury your gays” trope, as it has come to be called, is especially true of lesbian and bisexual women characters. The writers mocked it in a segment called “Jokes Seth Can’t Tell,” in which he brings out two of his women writers, Amber Ruffin and Jenny Hagel, who are Black and gay respectively, to tell jokes that would be inappropriate coming from a straight, white man.

Midway through the segment, Myers says, “Hey Jenny, what’s the difference between a lesbian rom-com and a straight rom-com?”

The camera then zooms in on Hagel.

“Hey guys, Jenny Hagel here,” she continues. “I don’t know if you know this, but in lesbian movies and tv shows, the lesbians always die. Every time. I might not live ’til the end of this segment.”

When the segment ends, Hagel is lying face down on the desk with dagger sticking out of her back, while Ruffin shouts, “My friend! My gay, gay friend!”

The segment also included a joke in which Seth brought up a study that said lesbian medical students have higher rates of burnout than straight students.

“Because it’s tough to do all that studying and take care of 5 dogs,” Hagel retorts.

In addition to writing for Meyers, Hagel and Ruffin also executive produce The Amber Ruffin show, which Ruffin also hosts.