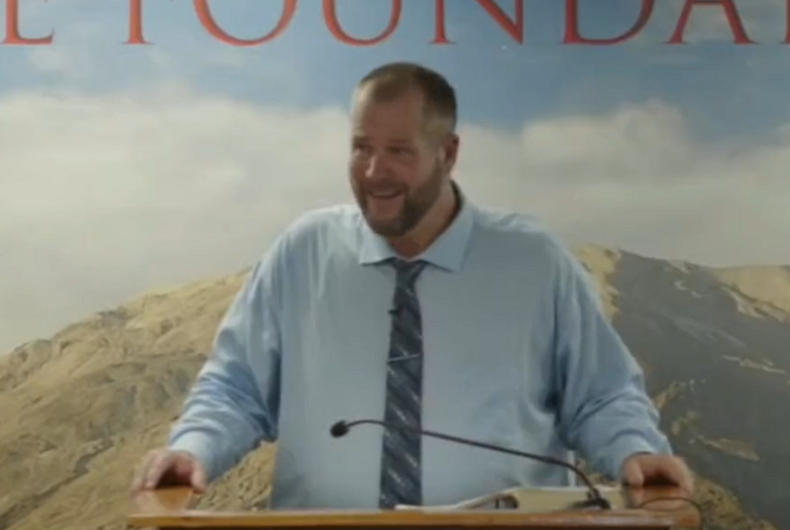 Christian pastor Aaron Thompson explained in a sermon why he uses the anti-gay slur “fa***t” so much while preaching the Bible.

Longtime readers of LGBTQ Nation may have noticed that preachers in New Independent Fundamental Baptist Movement (New IFB) churches – like Thompson’s Sure Foundation Baptist Church in Washington state and Stedfast Baptist Church in Texas – often use slurs from the pulpit, unlike other conservative Christian pastors who generally shy away from rude language while attacking LGBTQ people.

Thompson explained why: the word “fa***t” just sounds nice to him, and he doesn’t believe his target audience will understand fancy words like “sodomite.”

“And so what the inspired word is in this book is the right word, we shouldn’t be ashamed of it,” he said before defending a word that isn’t in the Bible.

“And I’m not gonna shy away from anything that the Bible says.”

But anti-LGBTQ slurs, which are not in the Bible, are okay to use because they just sound better. pic.twitter.com/wk5kGVMhj9

“You know what my proper pronouns are? I’m a he-she-it-they-dog cat-monkey,” he said. “I got the litter box in the room. I’m a cat: meow meow.”

“That’s the kind of stuff that’s going on in public schools, and they’re not even telling the parents about it… I don’t understand what’s going on. You can’t just identify as whatever you want to be and you’re magically that. Everybody knows you’re not a cat, you idiot.”

Earlier this year, another preacher at the Sure Foundation Baptist Church said that he hopes “every single homosexual dies.”

The New IFB movement also includes Steven Anderson’s Faithful Word Baptist Church in Arizona. Anderson has been banned from nearly three dozen countries for his extremist statements. In 2016, Anderson praised the Pulse nightclub shooter for killing “a bunch of disgusting perverts and pedophiles” and “disgusting homosexuals who the Bible says were worthy of death.”