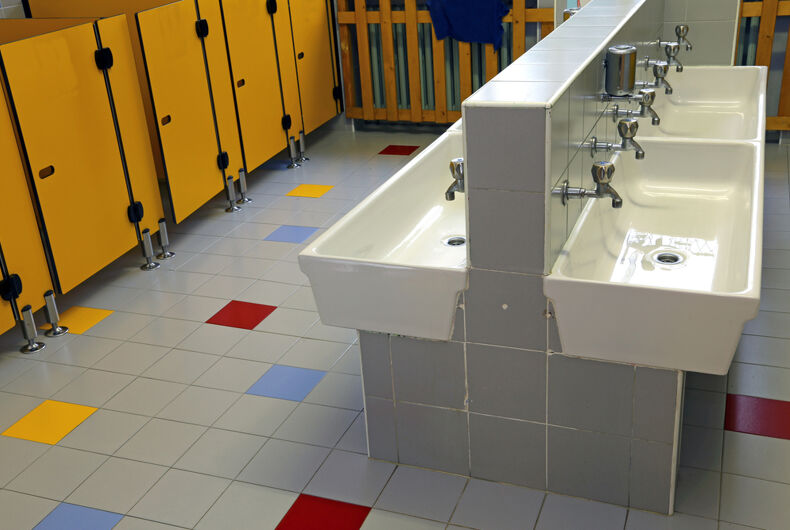 An eight-year-old transgender girl and her parents are suing the Tennessee Department of Education over the state’s Accommodations for All Children Act, which bans trans students from using school bathrooms that correspond to their gender identity.

On Thursday, the Human Rights Campaign filed the lawsuit in federal court on behalf of the child, identified as D.H., and her parents.

Under the 2021 law, which allows cisgender public school students and their families to sue if they’re not given a “reasonable accommodation” by their school if they don’t want to share bathrooms, locker rooms, and other facilities with trans people, D.H. was forced to use single-occupancy restrooms at school.

According to the lawsuit, D.H. stopped using school restrooms entirely and began limiting her food and water intake to minimize her need to use school facilities. She also developed migraines, reflux, and recurring nightmares of school.

“These restroom ‘accommodations’ provided to D.H. by the elementary school are not accommodations at all,” according to the complaint. “They reinforce the differential treatment and trauma associated with living under the [Accommodations for All Children Act], violating D.H.’s constitutional and statutory rights.”

The suit argues that the Tennessee law, signed by Gov. Bill Lee (R) in 2021, violates D.H.’s constitutional rights under the Equal Protection Clause and violates Title IX, which prohibits sex discrimination in education. In June, the Biden Administration announced changes to the legal interpretation of Title IX which would help prohibit discrimination based on sexual orientation and gender identity. Last month, a federal judge blocked the Education Department’s new guidance.

“It is unfortunate that Tennessee lawmakers are using their authority to attack some of our nation’s most vulnerable: our children,” said HRC litigation director Cynthia Cheng-Wun Weaver.

“Years ago, I chose to move to Tennessee because it was known as ‘the Volunteer State,’ whose citizens cared for their neighbors without hesitation – not a state that legalizes discrimination against helpless children,” D.H.’s mother said in a statement. “Now I am embarrassed to say that I live in a state that refuses to see anything beyond my child’s gender.”

“By filing this lawsuit, I am showing my volunteer spirit – because I’m fighting to not only affirm my child’s existence, but also the thousands of transgender and nonbinary children who live in Tennessee.”

This is the second lawsuit the HRC has filed against the Tennessee law on behalf of a transgender child. A previous suit, filed last year, was dismissed after the plaintiffs chose to leave the state.