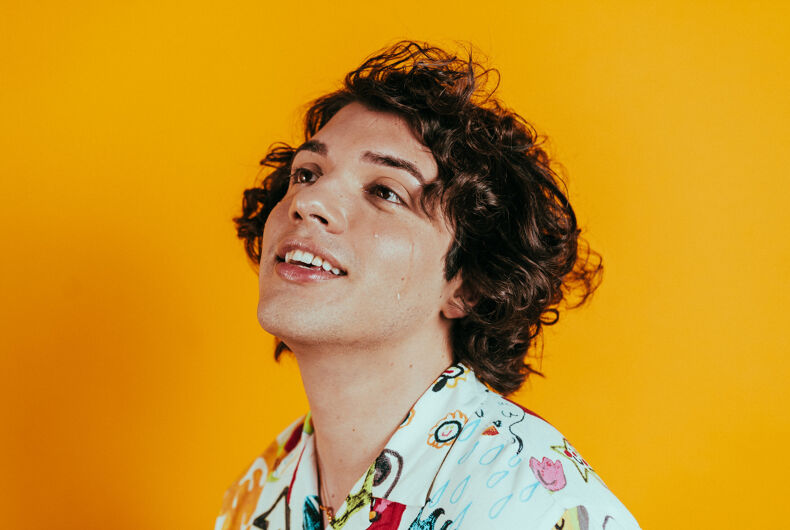 “I like being a happy, bubbly person overall,” Conlin says. “Some people say it’s my brand, but I think it’s just who I am as a person.”

Sunny, hopeful optimism is at the heart of not just who Conlin is, but also his music. His most recent single is a perfect encapsulation of this outlook on life. Conlin says “Hopeful Romantic” sprang from a period in which he was feeling particularly bummed about dating and relationships. What he thought might blossom into a relationship turned out to be just a fling, and subsequent flirtations similarly went nowhere.

“My confidence was a little shattered,” he says. “But I had this melody that I’d been sitting on for a little bit. Eventually the lyric, ‘despite it all, I still believe in love’ came to me. I’m still here, I’m still standing. I might have that feeling of loneliness, but that doesn’t mean forever. Despite all the nasty things that life or people that can’t communicate throw your way, I still believe that the concept of love exists. And there is hopefully someone out there for me. It hinges, really, on the feeling of hope.”

The result is an effervescent, 80s synth-fueled track that Conlin says epitomizes the “maximalist” pop sound that has come to define his work.

The song, along with what Conlin says is an album’s worth of material that he plans to release over the coming months, is the culmination of a period in which he’s come into his own as an artist.

Conlin grew up in Toronto listening to the pop music of the late 2000s and early 2010s.

“The whole Katy Perry ‘Teenage Dream’ era, Rhianna’s Loud album. Anything that’s just massive-sounding synths out the wazoo, big beats, catchy. I pull a lot of influence from that in my writing,” he says.

He played piano from an early age and picked up the alto saxophone in middle school. He began writing his own songs in his early teens.

“I’d play stuff and sing a little gibberish,” he recalls. If it sounded catchy enough, he would try to turn the gibberish into lyrics, and that remains his writing process to this day. “I like to say I’m a melody-first writer, usually,” he says. “I definitely approach it more from a Is this super catchy? Can I make an earworm out of this? mentality.”

After high school, he studied music at the Berkley School of Music, before heading to L.A. in 2019 to pursue a career in the industry. During that period, he released a few singles, which he describes now as finding his footing and discovering his sound.

He returned to Toronto in early 2020 and ended up spending the first two years of the pandemic at his parents’ house, writing and rethinking the kind of music he wanted to make.

“I’d been listening to a lot of people like Carly Rae Jepson, Charli XCX, almost verging on that hyperpop genre. I don’t do that, but I appreciate how they have all these different motifs going on at once, but somehow it all works,” he says. “I went back and listened to a bunch of 80s music—Prince, Madonna, Michael Jackson, Cyndi Lauper. I really took it in and sat down and I was fortunate enough to meet this producer named Olle Romo through the internet and we started doing virtual sessions. It just turned into this beautiful collection of songs that I’m slowly releasing.”

Now back in L.A., Conlin remerged in March with the synth-driven track “It Doesn’t Matter,” followed by “Hopeful Romantic” last month. And he has no plans to slow down. He’s already filmed a video for what will likely be his next single, a song about love at first sight called “Something About Your Face.” He describes the song as another big explosion of joy, “the kind of music you want to throw on and frolic through a field.”

With the world in what often seems like a constant downward spiral lately, that may just be the music we need. That’s Conlin’s outlook anyway.

“I talk in therapy about the unknown and how you can fall into a fear- or a faith-based tactic,” he says. “And I’m like, I may as well do the one that doesn’t scare me! Whether it’s a fake it til you make it sense of optimism, I don’t even know. But I’d rather have a mindset of, ‘Ok, things will be ok because they have to be.’ It makes me a more cheery person to be around, because it’s like, life ain’t gonna get me down!”