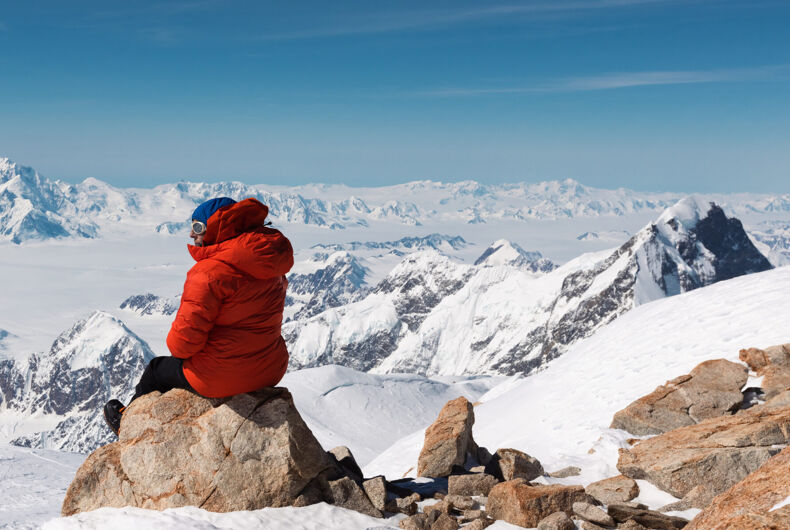 In Yukon, the smallest of Canada’s three territories, stands Mount Logan, the highest mountain peak in Canada and the second highest peak in all of North America. Its massive height and below-freezing temperatures mean that the snow around its peak has remained largely untouched for tens of thousands of years. Preserved within this pristine ice is a valuable treasure: records of the planet’s climate from the pre-Holocene, i.e. the time before human beings flourished across the globe and changed it beyond recognition.

In May this year, Alison Criscitiello scaled Mount Logan as part of the National Geographic and Rolex Perpetual Planet Mount Logan Expedition and drilled into this icy treasure chest to excavate secrets of the past climate it holds. Criscitiello is an ice core scientist at the University of Alberta, Edmonton, a professional mountaineer, and a National Geographic Explorer. A queer woman who lives with her wife and three-year-old, her relationship with the alpine environment is no less intimate.

Back in her lab, Criscitiello is studying the chemistry of the massive ice chunks she and her team have drilled out of Mount Logan. As she waits for the ice to reveal its secrets, a process that might take several months, she speaks to LGBTQ Nation about ice core science and what it means to be a queer woman in science.

An expedition of many firsts

The seeds of Criscitiello’s Logan expedition were sown in 2021 when she traveled with fellow geologist Rebecca Haspel to survey the field and find sites conducive to drilling. In this expedition – the first ever high-altitude radar survey conducted by two women – the duo and their team installed the highest weather station in North America.

Criscitiello and her team returned to the peak this year, equipped with machines that would drill out a “record-breaking” 327-meter-long ice core.

But the size of the ice core is not the only reason this expedition is unique. Ice structures, like the ones that Criscitiello works with, are of interest to scientists because they can reveal past conditions of the Earth’s environment, including sea-surface and atmospheric conditions. Knowing these details can help scientists understand how human beings have impacted the planet’s climate and make meaningful predictions about climatic conditions in the future.

For old climate records to be preserved well in ice, these ice structures mustn’t undergo seasonal melting (for example, during the summer). Such conditions exist in few places on the planet. The oldest ice records, thus, are found in the two poles – the Arctic and the Antarctic.

However, peaks of very high mountains, like Mount Logan, also receive very little summer melt, making it an enticing location for ice core scientists. The 327-meter-long ice core that Criscitiello has drilled out has been estimated to have preserved around 30,000 years’ worth of environmental data, making it the oldest non-polar ice core ever recovered.

Speaking to LGBTQ Nation, Criscitiello mentioned that the idea of recovering ice cores from Mount Logan has been “appealing to the ice core community for decades.” However, “it’s just a particularly hard place to get an ice core from,” she added.

What made recovering ice core samples from Mount Logan this hard? For one, the trek to the peak is quite intense and required Criscitiello to prepare herself with running and strength training.

National Geographic reported that the trek from the base camp to the mountain’s peak took ten days. In these ten days, Criscitiello had to let go of three crew members who suffered from high altitude–related health issues. However, even with an unexpectedly smaller team and lesser resources, Criscitiello and her team completed the extraction in a remarkable eleven days.

Being a queer woman in science

“I think the kind of the science I ended up falling in love with stemmed from the places that I fell in love with,” Criscitiello told LGBTQ Nation.

Growing up in eastern Massachusetts, she was no stranger to mountains. After her undergraduate degree, she worked as a ranger and mountain guide for some of the world’s largest peaks, including Mounts Denali and Aconcagua.

“I also was working for enough years in the same places and watching the landscape change; I just was really driven to go back to grad school to understand these places better,” she added.

During her graduate school, she went to Antarctica and Greenland for the first time.

“I was ping pong-ing around the poles in my early grad school year, and I just knew it was the right fit,” she recollects.

Being a queer woman in science, high peaks are not the only challenging terrain that Criscitiello navigates. According to a 2016 report by the American Physical Society, LGBTQ physicists have reported facing sexual and verbal harassment, homophobic comments, intentional misgendering, and several other forms of exclusion. The report also adds that women experienced such exclusionary behavior at a rate three times higher than men.

A recent paper in Science Advances corroborates observations from the 2016 report while adding that “LGBTQ STEM [science, technology, engineering and math] professionals were more likely to experience career limitations, harassment, and professional devaluation than their non-LGBTQ peers.” Moreover, according to this study, “LGBTQ were more likely to intend to leave STEM”.

Talking to LGBTQ Nation about how being a queer woman has impacted her journey in science, Criscitiello admits, “I would like to think that it has had no impact on my career. But the truth is, it has probably entirely shaped where I’ve ended up.”

As an example, she talks about how she chose her PhD advisor. While she had a “more enticing offer” from a male advisor at Boston University, she decided to work with a female advisor in a “more liberal setting” at the Massachusetts Institute of Technology (MIT). While the potential advisor at Boston University was charismatic on the surface, women in his group warned Criscitiello that he was homophobic and sexist.

“I made my decision – that huge career decision – at that point based entirely on that. And I have no idea what would have happened. But, I know he has since been fired,” Criscitiello told LGBTQ Nation.

In 2014, Criscitiello was awarded MIT’s first ever PhD in glaciology.

“In hindsight, I’m so glad I made the decision,” she says.

Making way for others

As determined as Criscitiello is to scale high peaks and drill secrets of the Earth’s past climate, she is equally determined to improve access to science and science education for younger women.

In 2015, she and two other Canadian women founded Girls* on Ice Canada. The idea of the program, in Criscitiello’s own words, “is to offer young women a completely cost-free, very low-barrier opportunity to travel on glaciers and learn how to be self-sufficient and confident in big mountain landscapes.”

Further, the program offers young women an opportunity to develop a science project of their own.

A post shared by Girls* On Ice Canada (@girlsonicecanada)

Looking back, Criscitiello says, “For some reason, I divorced my personal life from my science until more recently. However, over the last five years, I have seen that it’s important to be visible.”

Her efforts have resulted in her leading a team that she calls “an incredibly smart and incredibly diverse all-female hard science powerhouse of a group.”

Criscitiello is grateful to be leading her group. “I think my openness has drawn them [to my group]; so we’ve all gained from it,” she says, adding, “I’m very lucky.”

Trolls swatted trans streamer in terrifying episode. She went into hiding but they found her again.