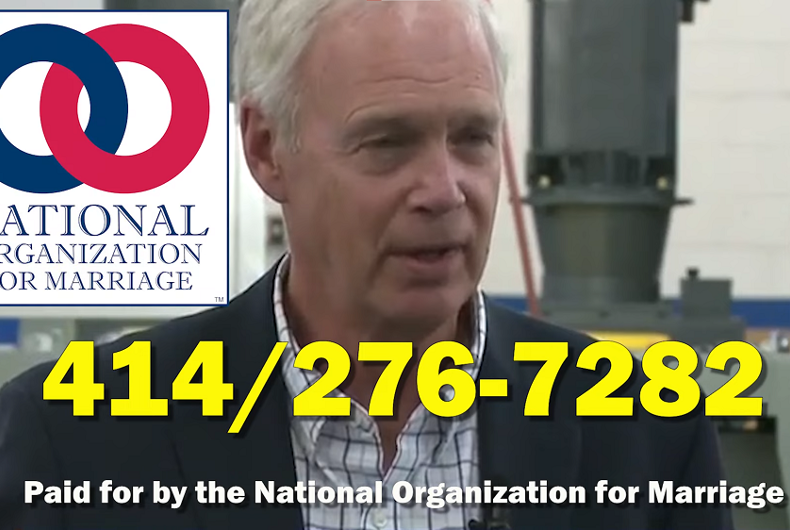 The National Organization for Marriage (NOM) is running a television ad against Sen. Ron Johnson (R-WI) to pressure him to oppose the Respect for Marriage Act.

Last month, Johnson said that he would “not oppose” the passage of the Respect for Marriage Act, a bill that will require the federal and state governments to recognize interracial and same-sex marriages performed in any other state. Since 60 votes are needed in the Senate to get past the filibuster, Johnson could be one of 10 Republicans needed to get the bill passed.

While the bill passed the House with all Democrats voting for it and most Republicans voting against it, it has been put on hold until at least September in the Senate, giving organizations time to pressure senators to vote for or against it. And NOM is running an ad in Wisconsin telling voters to pressure Johnson to vote against it.

The video shows Johnson telling a reporter, “Right now I don’t see any reason why I should oppose it.”

“No reason?” the voiceover says. “Nearly 60% of Wisconsin voters cast ballots putting marriage as one man and one woman in the state constitution.” The ad is referring to a 2006 ballot initiative in the state that was overturned in 2014 by a federal judge.

The ad ends by encouraging viewers to call Johnson’s office.

While many states did pass bans on marriage equality through constitutional amendments and ballot initiatives in the 2000s and early 2010s, public opinion has changed drastically. Forty-two percent of Americans supported marriage equality in 2006 while seventy-one percent support it today, according to Gallup.

Before the Senate went into recess this month, out Sen. Tammy Baldwin (D-WI) said that she believes that there will be 10 Republicans voting in favor of the Respect for Marriage Act.

“There are five Republicans who have publicly stated that they will support the Respect for Marriage Act, and I have spoken with an additional — well, additional many, but five additional members have indicated they are leaning in support, but I think because of how crowded the calendar is for next week, which is our last week before the August recess, and in light of the fact that we can’t have any absences, we need everybody there, and we have a few members with COVID, this is probably going to be a vote that occurs, what I would hope would be early September,” Baldwin said.

Proponents of the bill say that it’s necessary in case the Supreme Court overturns the 2015 Obergefell v. Hodges decision that legalized marriage equality in all 50 states.

The Court overturned the federal right to an abortion in its Dobbs v. Jackson Women’s Health Organization decision in June. In a concurring opinion, Supreme Court Justice Clarence Thomas wrote that that Court should “reconsider” other cases built on the same legal framework as Roe v. Wade, including Obergefell.