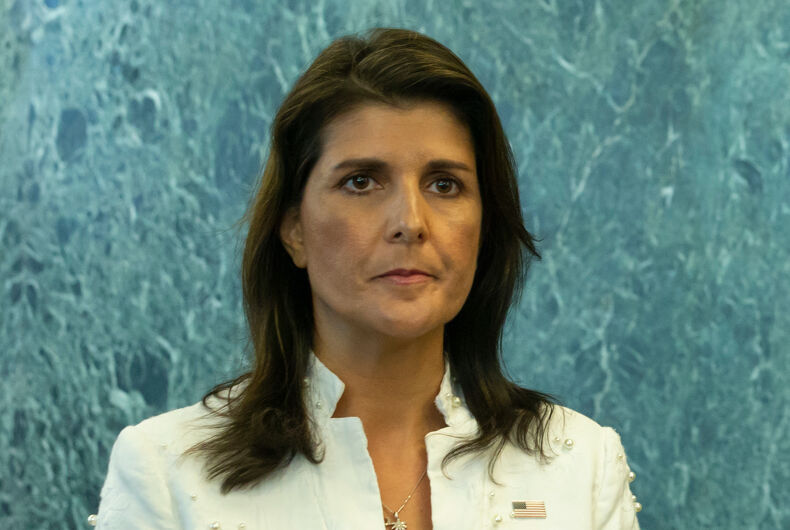 Transgender issues could take center stage in the 2024 Republican presidential primary, as former UN ambassador Nikki Haley (R) showed in a recent interview where she railed against trans-inclusive policies in schools and the military.

In an interview with Fox News Sunday, the former South Carolina governor spouted transphobia when responding to a question about her possible candidacy for president.

“What I will tell you is we need to snap out of it,” she continued. “This is absolute craziness. We’ve got enemies trying to come after us, and America has been naive. It’s been weakened. It’s been asleep at the wheel.”

While it might seem odd that, considering all of the problems facing Americans, Haley would respond to such a question with transphobia. But her response seemingly falls in line with the election playbook of Gov. Glenn Youngkin (R-VA).

Youngkin won over Virginia voters in 2021 by capitalizing on voter fears about “woke” trans-inclusive policies and lessons about institutional racism in schools. He said that such policies and curricula override parents’ wishes of how they want their children to be educated.

Youngkin also supported the banning of LGBTQ books from school libraries and spread disinformation claiming that one district’s trans-inclusive bathroom policy led to a child’s sexual assault. In truth, the assault allegedly occurred before the policy was even adopted.

Youngkin’s 2021 campaign foreshadowed the Republicans’ 2022 midterm campaign strategy. Now, Republicans across the country have introduced over 240 anti-LGBTQ bills in state legislatures, most of which target trans-inclusive school policies, including the right of trans students to enter bathrooms and sports teams matching their gender identities.

These divisive bills are largely meant to engage the far-right evangelical voter base and to persuade fearful undecided voters who worry that trans-inclusive policies will endanger their children’s safety, athletic scholarships, and personal beliefs about gender.

If Haley’s statements are any indication, the Republican primary for the 2024 presidential race will feature such queerphobia as a mainstay.

Of course, Haley has never been a very supportive voice for LGBTQ rights within the Republican party. Though she spoke out against Chechnya’s anti-LGBTQ purge during her time as U.N. ambassador, she has consistently opposed equal rights for transgender students, even during her time as governor. During her governorship, she also argued that her state shouldn’t have to recognize legal same-sex marriages.

It’s hardly any wonder she was allegedly booed away from a New York Pride event in 2017.

Nikki Haley on Fox News Sunday makes clear that if she runs for president, her campaign will largely be about transphobia and culture war issues pic.twitter.com/XCzL5TrIxE

Conservatives sue school for refusing to out transgender students