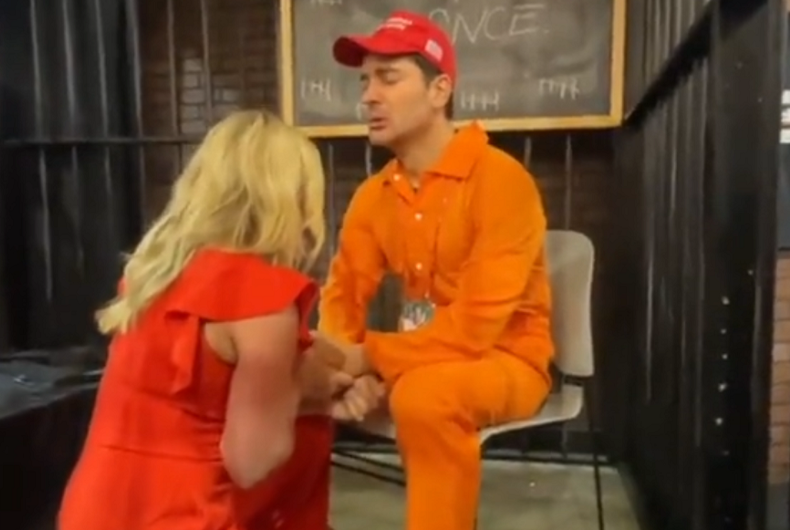 In a bizarre scene from last week’s Conservative Political Action Conference (CPAC), Rep. Marjorie Taylor Greene (R-GA) prayed with gay conservative activist Brandon Straka as he cried while pretending to be a Capitol rioter held in the D.C. jail.

Many conservatives have been angry that people got arrested for storming the Capitol on January 6, 2021 in an attempt to overturn the results of the 2020 election. The events of that day – which included making a makeshift noose while chanting for the death of Mike Pence and armed Trump supporters pushed past police into the Capitol – resulted in five deaths.

Some of the rioters are being held in prison in D.C., and, to honor them, CPAC constructed a fake jail cell at their convention for Straka to stand in while wearing an orange jumpsuit and red cap.

According to journalist Lauren Jedeed, “you receive a silent disco headset that plays harrowing testimony from people arrested for participating in J6. Instead of dancing, you stand around and watch this guy [Straka] cry.”

He wept sitting on the bench

He wept sitting on the floor

He tallied days on a chalkboard set up for the purpise pic.twitter.com/dgGag1Qcjn

Straka has been in the news for allegedly snitching on his fellow conservatives who were at the Capitol on January 6. He received a plea deal for his participation in the riot where he encouraged the angry crowd to steal a police officer’s shield, and prosecutors praised his “willingness to assist the government by providing complete and truthful information,” including at least one incriminating voicemail message he received from another conservative activist.

While Straka’s display may seem ridiculous to many people, it wasn’t for Rep. Greene. She saw the performance on Friday and went into the jail cell with Straka. The Daily Mail reports that the crowd cheered as she entered.

Straka said he was surprised to see her.

“She prayed with me for our nation,” he said. “Both sides of the aisle for all people and no, I thought it was a really beautiful, special moment.”

Straka insisted that people who rioted at the Capitol – unlike other criminals – have already been punished enough.

“I know people who saw open doors and walk through them and their lives have been destroyed,” he said. “They’ve been turned in by their children. It’s pretty horrific.”

Others got video too.

If Brandon Straka fake crying in his fake prison cell at CPAC, while crazy Christian nationalist’s throw money at him and pray for him is not cult behavior, I don’t know what is. pic.twitter.com/qY55C1ScyY

Other people on social media called out Straka for turning on his fellow insurrectionists and then presenting himself as a victim of the government at CPAC.

Is there anything more Republican than Brandon Straka turning in his insurrectionist buddies to avoid jail time, then cosplaying their incarcerated versions for cash at CPAC? pic.twitter.com/BmJ6Y7XZJu

@RepSwalwell…I swear the Dems would lose a one car race

The real story is that Brandon Straka, the guy pretending to be a martyr, ratted out his fellow January 6 rioters to get a lighter sentence…proving once again how easy it is to con Trumpers

The only reason @BrandonStraka is sitting in a fake jail cell doing “performance art” rather than a real one right now is because he turned on every person he knew about who was involved in the January 6th insurrection, which obviously included some very high-level coconspirators

Leader of the Walk Away movement, Brandon Straka, performs the Kyle Rittenhouse Crying Act at CPAC.

The REAL story is that like Groper Leader, Baked Alaska, Brandon ratted out fellow MAGAS to keep himself out of REAL JAIL. https://t.co/4avWxhPRM5

Straka, a former hairdresser, first got media attention when he created the #WalkAway movement that encouraged groups that usually vote for Democrats – like LGBTQ people – to “walk away” from the Democratic Party and vote for Republicans. He was not only present at the Capitol on January 6, but he spoke at a “Stop the Steal” rally the day before, encouraged thousands of people on social media to continue storming the Capitol the day of, and proudly bragged about it after.

In 2019, Straka sued the New York City LGBT Community Center after the center refused to let him host a conservative panel discussion on their property. He claimed that was a form of anti-gay discrimination because, he said in his court filing, the center was “refusing to rent space to LGBTQ people because they are not embracing left-leaning political beliefs is the same as refusing to rent to them because they are LGBTQ.”