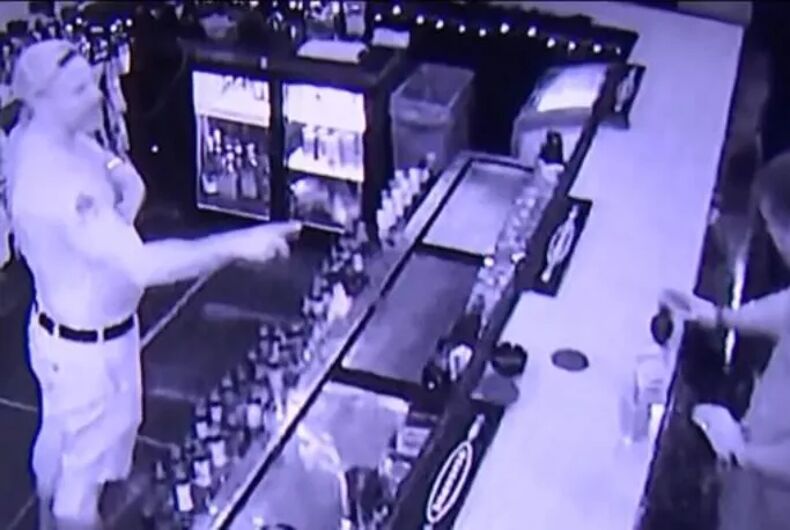 In Florida gayborhood Wilton Manors on Tuesday, a man was tackled to the ground after he pulled out a grenade at a bar.

The takedown at popular watering hole The Corner Pub was captured on surveillance video outside the bar’s front door around 9 p.m.

Witnesses say the incident started when the man, whose identity hasn’t been released, walked into the bar and set a grenade down in front of him.

“I was just thinking, stay calm, because we have a lot of people in there, and this is our community, so I want to keep everybody safe.”

As they talked, Shakespeare says the man claimed there were guns in his car, as well.

Bar regular and former Marine Darrell Darling overheard the exchange and moved in to help.

The man “was agitated at somebody in the bar, looking to pick a fight,” Darling recalled. “He had shown me a grenade immediately as I walked up. It looked real.”

Darling kept the man occupied in conversation and bought him a drink while Shakespeare called his boss, who notified the police and quietly got the rest of the crowd outside.

“The bartender handed me a note that said, ‘The guy behind me has a grenade,’” one witness told WSVN News. “I grabbed my stuff and I left.”

While patrons made their escape, Darling says the two talked about their histories in the military and the police.

“I used certain intentions to just keep his focus on me so we would be the last ones leaving the bar,” Darling said.

When the bar was cleared out, Darling talked the man out the front door and made his move.

“I grabbed one hand, swept his full leg out and just put my full weight on the back of his body so he could not get up,” Darling said.

Wilton Manors police were waiting and took the man into custody.

A statement from WMPD described the man as an “emotionally disturbed male.” He was remanded to a mental health facility.

His grenade was a dud.