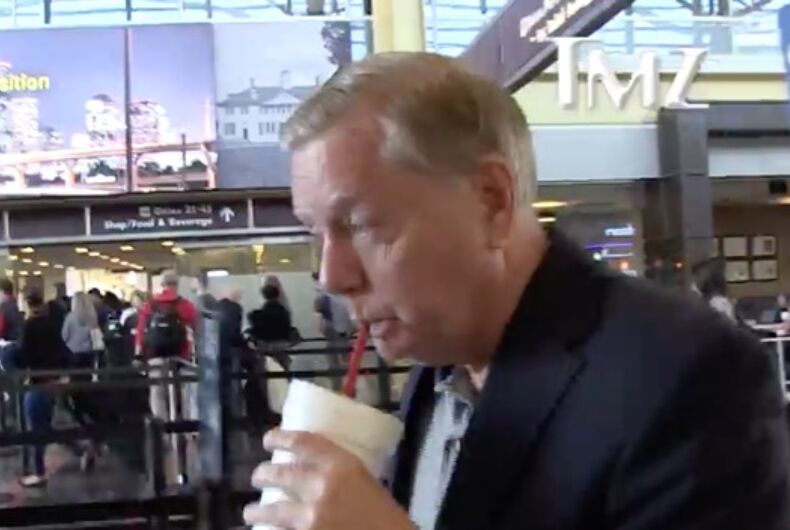 Sen. Lindsey Graham (R-SC) said that he will vote against the Respect for Marriage Act, calling it “the federal government taking over defining marriage,” even though the bill would not require any state to give same-sex couples marriage licenses.

Appearing on CNN’s State of the Union, host Dana Bash asked Graham about Sen. Rob Portman (R-OH), who is one of the cosponsors of the Respect for Marriage Act.

Proponents of the bill say that it’s necessary now that the Supreme Court has started rolling back rights based on substantive due process, like the federal right to an abortion. Supreme Court Justice Clarence Thomas wrote in his concurring opinion in Dobbs v. Jackson Women’s Health Organization that the Court should “reconsider” its ruling in favor of marriage equality in 2015.

He still made it clear that he’s against federal legislation protecting marriage rights: “If you’re gonna ask me about the federal government taking over defining marriage, I’m gonna say no.”

Lindsey Graham on CNN says that "I think states should decide the issue of marriage," but when Dana Bash asks him if states should also decide whether interracial marriage is legal, he dismisses the question as a distraction from inflation pic.twitter.com/L1rGv6ZGBi

Despite his protests, Graham was actually in favor of the federal government telling states how to define marriage for the majority of his career.

In 1996, he voted for the Defense of Marriage Act, which banned the federal government from recognizing same-sex marriages performed by states.

In 2006, he supported a constitutional amendment to ban same-sex marriage, which opponents said would unfairly trample on states’ rights by preventing liberal states from recognizing same-sex marriages.

“I believe in the traditional definition of marriage as being between one man and one woman,” said Graham at the time. “Traditional marriage is an institution worth protecting and this amendment will accomplish that goal.”