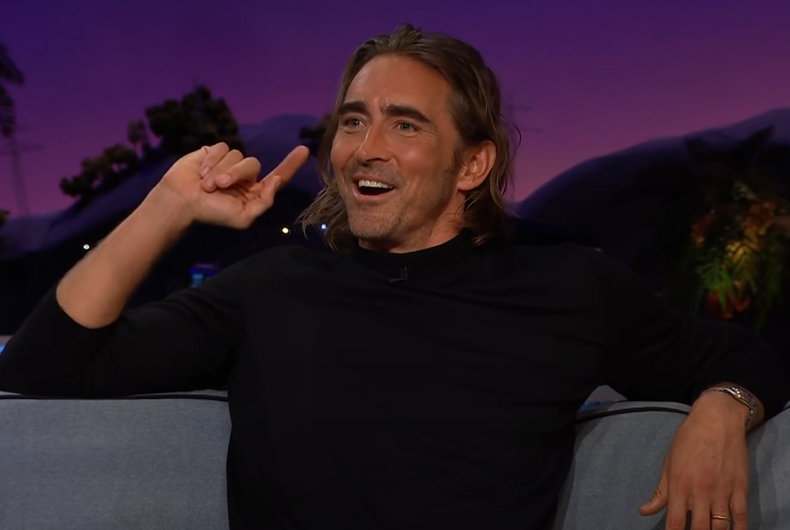 Actor Lee Pace has revealed that he is married to longtime partner Matthew Foley. The Bodies Bodies Bodies actor confirmed rumors about his marital status in a new profile in GQ.

Pace described how a mutual friend set the couple up a few years ago: “I said to my friend, Nick, ‘You know a lot of people, who do you have for me?’ And luckily, it worked out.”

“What I’ll say about being married, it was once described to me as an endless sleepover with your weirdest friend,” he continued. “In our experience, that is absolutely true. If you’ve found one person you can be weird around, hold on tight.”

The couple are apparently also thinking about starting a family. “I’d love to have kids. I think there’s nothing better than little kids running around,” he said.

Pace’s public coming out process has been tricky over the years. In a 2014 interview, his Hobbit co-star Ian McKellan accidentally outed Pace, including his name in a list of all the out actors in the fantasy trilogy’s cast.

Pace kept mostly quiet about his sexuality while playing queer characters in 2003’s Soldier’s Girl, AMC’s Halt and Catch Fire, and the Broadway revival of The Normal Heart. Then, in a 2018 interview with W Magazine while he was appearing in the Broadway revival of Angels in America, Pace was seemingly offended when asked directly about his sexuality.

“I’ve dated men, I’ve dated women,” he told out journalist Bryan Moylan. “I don’t know why anyone would care. I’m an actor and I play roles. To be honest, I don’t know what to say – I find your question intrusive.”

He later addressed the quote in a Twitter post, officially coming out publicly for the first time.

“In a recent phone interview, I was asked questions that I wasn’t expecting and found myself momentarily at a loss for the right words,” he wrote. “My privacy is important to me, so I protect it. When interviewed by the media, I keep the focus on my work. As a member of the queer community, I understand the importance of living openly, being counted, and happily owning who I am.”

In a recent phone interview, I was asked questions that I wasn’t expecting and found myself momentarily at a loss for the right words. My privacy is important to me, so I protect it. When interviewed by the media, I keep the focus on my work.

He spoke more openly about coming out in a 2018 New York Times profile. “The truth is,” he said, “when you grow up queer, you get tough. And perceptive. And you learn how to field it. When someone comes at you that you don’t know, interested in that area of your life, it’s not always a good thing. I certainly knew that when I was a kid.”

He revealed what he perceived as pressure to downplay his identity for the sake of his career. “I remember when I signed with a new agent, we worked together for a year. He took me to some coffee shop in the middle of the afternoon and I knew he wanted to talk about something. He said, ‘I heard you’re gay, is that true?’ I said, ‘Is that a problem?’ And of course he said, ‘No, fine, just felt like I needed to know.’ But within about a year, he was no longer working with me.”

In that same profile, he hinted at a new relationship with an unnamed fashion executive.

Fans began to speculate about whether Pace had tied the knot last year, when he showed up at the Met Gala wearing what appeared to be a wedding band. When The Cut asked about it, he played coy: “What? No! How did that get there? Gus [his dog], do you know anything about that?”