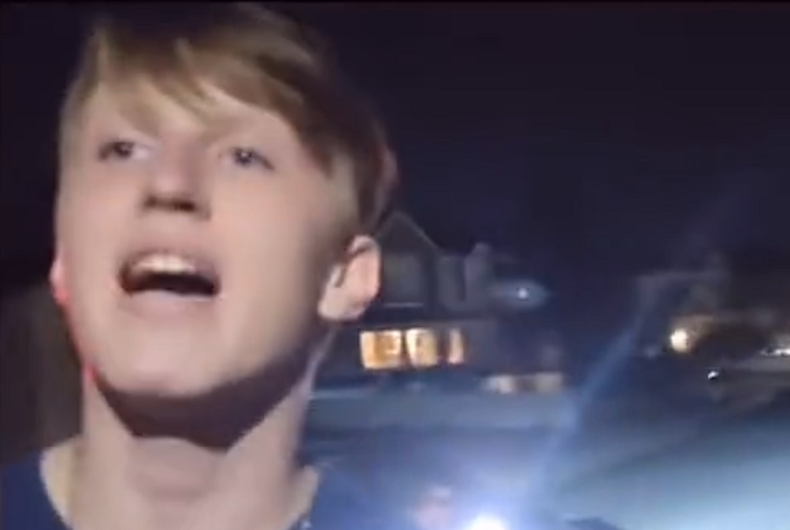 One of the alleged assailantsPhoto: Screenshot

Late Friday night in the quiet suburb of Sandy, Utah two teens just graduated from high school were attacked by another young man after the couple was spotted hugging.

Christian Peacock and his boyfriend Jacob Metcalf were standing at the end of Peacock’s driveway as the two were saying a long goodbye for the night. A dark sedan with five occupants rolled past slowly and revved the engine, as one of the group allegedly hissed out the window, “F–k you, fa—ts.”

The car continued slowly down the street and disappeared.

The pair stood there in disbelief, they told The Salt Lake Tribune, and Peacock asked Metcalf to stick around. Forty-five minutes later, as the couple continued their goodbyes, the sedan returned, and then came to a stop.

Two teenage boys got out of the vehicle.

“We don’t like seeing gay people on our street,” one said, according Peacock and Metcalf.

The boy took his shirt off and began flexing. “Do we turn you on?” he asked.

Three others in the car laughed at their friend’s taunts, while one filmed the incident.

The shirtless young man then walked up to Metcalf and pushed him on the shoulder. Peacock says he jumped in front of his boyfriend and told the teen to lay off.

“Just get out of here,” Peacock recalls shouting. “You’re repressed. That’s why you’re acting this way! You’re probably also gay and acting out because of it!”

That’s when the young man turned on Peacock and allegedly threw a hard punch to the left side his head.

Peacock’s sister Jocelynn, 19, ran out of their house when she heard the confrontation. She found her brother sitting on the sidewalk, where Metcalf had set him down, in a state of shock. He’d suffered a concussion and his brain was swelling.

Metcalf and Jocelynn Peacock both pulled out their phones to identify the perpetrators.

As seen in Metcalf’s footage, he yells at the group: “Get out of here! Get the f–k out of here … What the f–k is wrong with you people? You’re are f–king disgusting!”

He rounds the vehicle trying to get a shot the license plate, but one of the teens blocks his view.

🚨🚨 Sandy, UT – A gay young man was hugging his boyfriend in front of his home. The young men in this Infiniti stopped and the one person punched the kid in the face while calling him a “fa**ot.” We need to identify this assailant. Contact Sandy, UT police. ⚠️Language⚠️ pic.twitter.com/801SYBoBUt

At the same time, Jocelynn Peacock was taking pictures of the alleged assailant and the others in the car. When the group finally took off down street, she chased the vehicle and captured the license plate number.

She shared both on her Instagram and Snapchat pages.

A friend recognized the car and knew the person who drove it. That led Peacock’s sister to the boy who threw the punch.

She invited the boy’s family to their house the following day to address the incident. Police were waiting.

The boy, Peacock recalls, didn’t say a word to him.

The 17-year-old was taken into custody and faces a possible class A misdemeanor for simple assault, enhanced by a hate crime allegation.

If charged, Peacock’s assault would be a test of Utah’s new hate crime law, which elevates any criminal charge to hate crime status if the crime appears to be motivated by someone targeting another person’s ancestry, disability, ethnicity, gender identity, national origin, race, religion, or sexual orientation.

The attack, Peacock said, “made me take a step back and realize this happens to a lot of people in our community, the LGBTQ community. And we need to talk about it more.”

About his sister, Peacock added: “She’s a badass.”

Peacock says Metcalf asked him to be his boyfriend on May 4, a day he jokes he won’t forget, even if he has a head injury. On their first official date, the couple went bowling, followed by dinner at an Italian restaurant.

This fall, the pair will attend the University of Utah together.