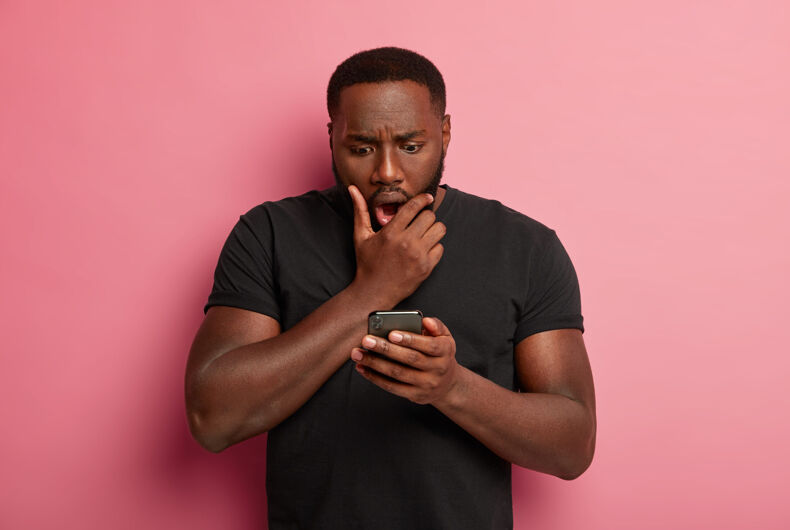 Jacob, a young man in Australia, was horrified to find his homophobic father on the men’s hook-up app Grindr, even though his father is still married to his mother after 27 years.

The young man shared his experience with and sought advice from the Australian radio hosts Kyle Sandilands and Jackie O. Jacob said his father’s headless photo on the app showed a walk-in closet that he recognized from his parents’ home.

So Jacob began chatting with the profile to try and figure out whether the person’s profile was fake.

“I wasn’t flirting with him,” Jacob reportedly said. “I just engaged in normal conversation, told him I liked his picture and asked where he is from. Then I asked for a picture of his face. When he sent it through, it was my dad.”

Jacob felt especially surprised considering that, years ago, his father had “disowned” him for coming out as gay.

“He was super against it when I was coming out,” Jacob told the radio hosts. “He hated me. He was super angry and didn’t want anything to do with me in his life.”

Jacob said that he and his father had since reconnected and noted that his parents seem happily married since he has never heard of any serious disagreements between them.

But now he’s worried that his father’s secret may hurt his mom. He said he wants to hear his father’s side of the story and to understand why, if he is interested in men, he has been “hiding it from me for so long.”

One caller on the radio show advised Jacob to speak to his father before discussing the incident with his mom. Other callers said they had encountered similar cover-ups from their own fathers, but some said that Jacob’s father deserved a chance to admit his possible interest in men and then live authentically, whether that meant divorcing Jacob’s mom or not.

“Sometimes people are threatened by gays and lesbians because they are fearing their own impulses, in a sense they ‘doth protest too much,'” the study’s lead researcher Richard Ryan said. “In addition, it appears that sometimes those who would oppress others have been oppressed themselves, and we can have some compassion for them too, they may be unaccepting of others because they cannot be accepting of themselves.”

Hate groups are registering as churches now. 40 Congressmembers want the IRS to investigate.

Trans cyclist stripped of silver medal in the middle of competition