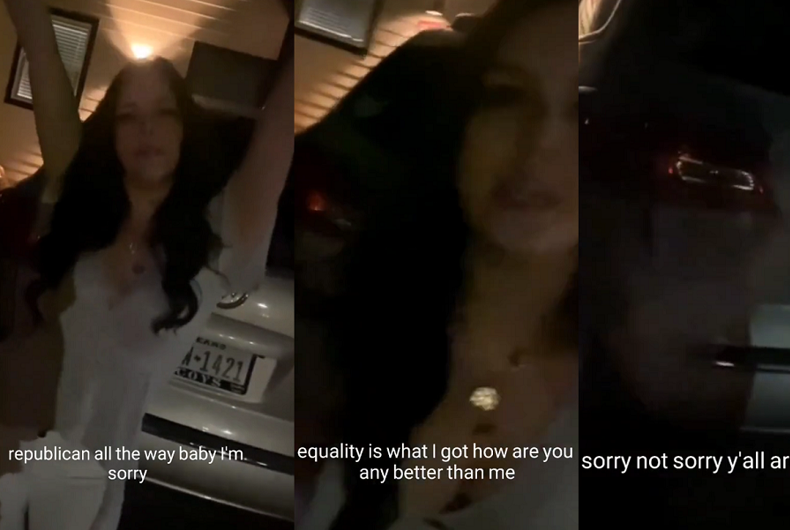 The owner of a fashion boutique in San Angelo, Texas has been arrested on hate crime charges for attacking a queer couple while shouting anti-gay slurs.

“Republican all the way, baby!” Evan Berryhill-Jewel shouted while being recorded by her neighbors – Charles Hardy and his partner – when she returned home drunk one evening. Hardy said that Berryhill-Jewel almost ran over him as he was taking out the trash.

Video of the altercation went viral in April, and police arrested her on Monday in connection to the incident. She is facing a charge of assault because of bias or prejudice, according to Advocate. Her bond has been set at $1000.

In April, the couple said that Berryhill-Jewel almost ran them over while she was driving drunk in the neighborhood, and she responded with anti-gay slurs.

“You f**king fa***ts need to learn that equality is what I got,” Berryhill-Jewel said. “How are you any better than me?”

“I’m sorry not sorry that I’m not a f**king Joe Biden fan,” she said as her bizarre ranting continued. “How do y’all like the f**king pain.”

“I can’t hear you over your ear piercings, ewww,” she told Hardy’s partner.

“Will we gross you out enough to move over a space?” he responded. She was parked in two parking spots at once.

Police said that Berryhill-Jewel posted notes to the couple’s door and car that said “fa***t.”

According to a San Angelo Police Department spokesperson, said that the alleged victims didn’t want to press charges at first, but then they found Berryhill-Jewel’s notes the next day.

Hardy, who is transgender, said that he has always been the target of harassment in the conservative part of Texas, but it’s only recently that the anti-LGBTQ incidents have escalated.

“It’s hard, it’s very hard,” Hardy said. “My partner asked Ms. Berryhill to stop, because they have terrible anxiety, and instead of having compassion, she just mocked them and exacerbated the situation.”

The original video of the attack has been removed from social media.

Berryhill-Jewell posted an apology to Facebook where she blamed alcohol and said that she has gay friends. It was later deleted.