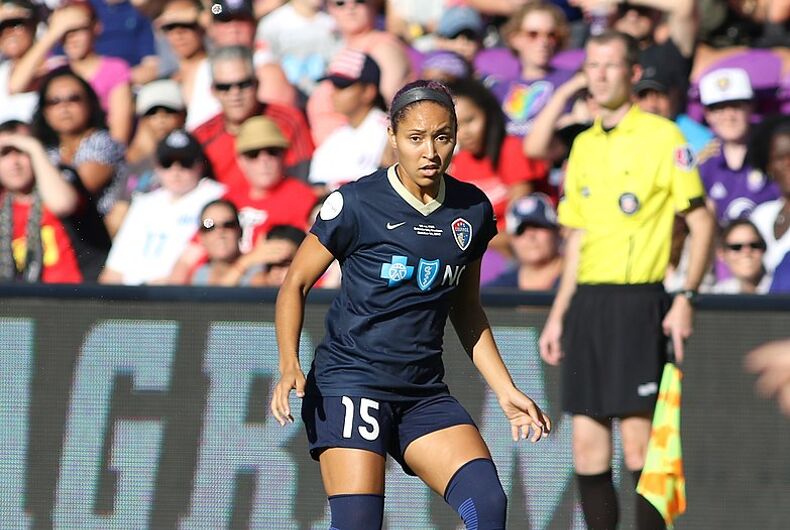 A controversial National Women’s Soccer League player refused to participate in a game on Friday because she would have been required to wear a special rainbow embellished jersey in celebration of LGBTQ Pride.

Defender Jaelene Daniels of the North Carolina Courage sat out the match against the Washington Spirit, which was part of Courage’s Pride Night at WakeMed Soccer Park.

“Jaelene will not be rostered tonight as she has made the decision to not wear our Pride jersey,” a spokesperson for the team said in a statement ahead of the game. “While we’re disappointed with her choice, we respect her right to make that decision for herself. We’re excited to celebrate the LGBTQIA+ community with our fans, players and staff tonight and look forward to hosting our first ever Pride Festival before kickoff.”

After Friday night’s game, Courage coach Sean Hahas said he wanted to celebrate the team’s LGBTQ players and hoped that Daniels’s decision hadn’t been a distraction.

“What we have to remember is, it’s the second time that they’ve worn those jerseys and I know how powerful it was for them, and how much it means for them. And my number one thing was nothing is going to come in between that, because that’s important to them and that means something to them, and I stood by that.”

Daniels is a devout Christian and has a history of refusing to wear Pride-themed jerseys. In 2017, she declined to play for the U.S. Women’s National Soccer Team, later telling The Christian Broadcasting Network that she made the decision because she would have had to have worn a rainbow jersey.

“I just felt so convicted in my spirit that it wasn’t my job to wear this jersey,” she said in a 2018 interview on The 700 Club. “I gave myself three days to just seek and pray and determine what he was asking me to do in this situation… I knew in my spirit I was doing the right thing. I knew I was being obedient.”

Daniels had previously tweeted her disappointment in the Supreme Court’s 2015 decision establishing the constitutional right to marriage equality. “This world is falling farther and farther away from God,” she tweeted at the time. “All that can be done by believers is to continue to pray.”

After the U.S. Women Soccer team’s World Cup victory in 2019, Daniels was embraced by right wing media as a victim of the LGBTQ agenda. She’s previously played for the Courage from 2017–2020. Daniels faced backlash over her anti-LGBTQ views when she was re-signed to the team in 2021.

“In response to the recent news of re-signing Jaelene Daniels, we as a club acknowledge the impact this announcement has on our community,” the team said in a letter to fans last December. “We’ve spent the past few days reading your messages and reflecting on our actions. We are very sorry to all those we have hurt, especially those within the LGBTQIA+ community.

“The decision to re-sign Jaelene was not made lightly and included significant conversations between organization leadership and Jaelene. The priority expressed in those conversations is the safety of our players and maintaining an inclusive, respectful space for the entire team.”

“I remain committed to my faith and my desire for people to know that my love for them isn’t based on their belief system or sexuality,” Daniels said in a statement late last year. “I pray and firmly believe that my teammates know how much I cherish them, respect them, and love them.”