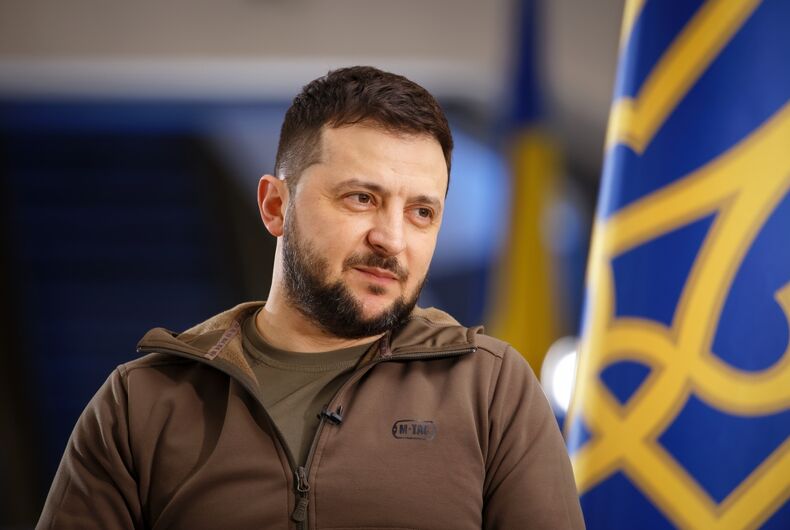 “All people are free and equal in their dignity and rights,”

With these words, Ukrainian President Volodymyr Zelensky indicated his desire to address the legal status of same-sex partnerships, and potentially same-sex marriages, in Ukraine when the country’s martial law period is over.

In addressing an official petition to his office, covering the question of the legalization of same-sex marriages, Zelensky explained that while Article 51 of the constitution of Ukraine states that, “marriage is based on the free consent of a woman and a man” and that the Constitution of Ukraine cannot be changed during the ongoing war for liberty with Russia, he directed the nation’s prime minister to look into the matter.

In his response, the president also noted that “In the modern world, the level of a democratic society is measured, among other things, through state policy aimed at ensuring equal rights for all citizens.”

Furthermore, Zelensky pointed out that his country’s family code didn’t specify gender in a definition that partially reads, “A family consists of individuals who live together, are connected by common life, and have mutual rights and obligations.”

While Zelensky centered the majority of his focus on the legal avenues of queer relationships, Ukrainian writer and thought-leader Maksym Eristravi, a gay man who commands a Twitter following of over 80,000 and co-hosts the internationally popular podcast Ukrainian Spaces, brought a human take as to what this means to Ukraine’s LGBTQ community and its allies and explained how the country arrived at this moment in history.

“I publicly came out over a decade ago, so this historic statement feels like a long time coming,” Eristravi told LGBTQ Nation. “We will celebrate when we make sure this historic commitment results in historic action.”

“Nevertheless, I keep reminding myself that Ukraine’s recent rapid progress towards human rights equality is not a gift or twist of fate. It comes from years of hard work by queer Ukrainians putting our lives on the line for equal rights which made this possible.”

Zelensky’s decision to address this topic came about due to an early June 2022 petition circulated by Anastasia Sovenko, a 24-year-old bisexual teacher, who was inspired by the plight of soldiers who were partnered in same-sex relationships during the war not having the same protections as those they served with.

Under Ukrainian law, the threshold to trigger a direct response from Zelensky to a question or demand raised in a presidential petition is 25,000 valid signatories. Sovenko’s missive received 28,592.

Town votes to defund library after claims it was “grooming” kids