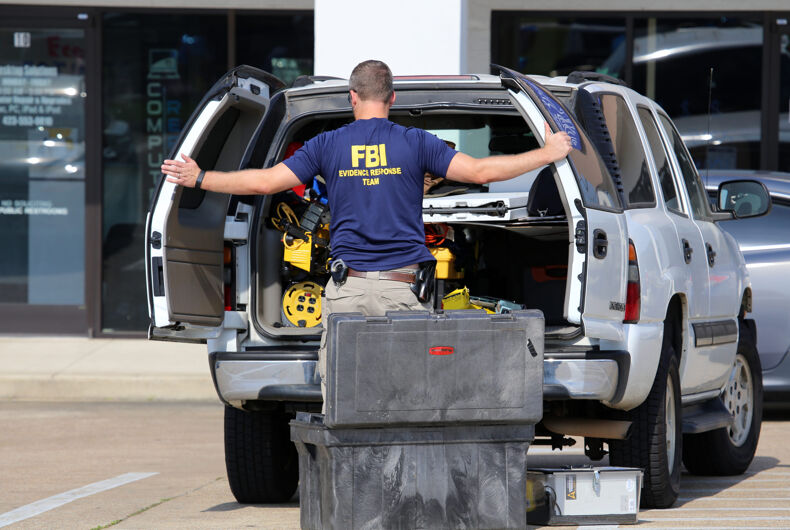 An FBI agent gathers evidence at the Armed Forces Career Center in Chattanooga, TN on July 18, 2015. An attack on the center was carried out on July 16th, 2015.Photo: Shutterstock

An armed man who was killed by police after he allegedly tried to attack an FBI field office in Cincinnati yesterday had a history of believing rightwing conspiracy theories, including the anti-transgender idea that “communists” are forcing children to transition.

The man, identified by the Ohio State Patrol as 42-year-old Ricky Shiffer, went to the FBI field office with an AR-15 rifle and a nail gun on Thursday morning. He fired the nail gun in the visitors’ center to attempt to breach the office’s security. He fled to his car and, after a chase by state police and a long standoff, he was killed by law enforcement officers.

Ohio State Highway Patrol spokesperson Lt. Nathan Dennis said that Shiffer raised a gun at officers when they opened fire on him. No officers were injured and Shiffer was pronounced dead at the scene.

A social media account with his name was found on Truth Social, the Twitter-like social media platform that Trump founded after he was banned from the real Twitter, potentially giving some insight into his motives. The @RickyWShifferJr account holder on Truth Social identified himself as an electrician from Columbus, Ohio.

“People, this is it,” Shiffer wrote this past Monday on the Truth Social account, the day that Donald Trump’s residence at Mar-a-Lago was raided by the FBI. “I hope a call to arms comes from someone better qualified, but if not, this is your call to arms from me.”

He encouraged people to “leave work tomorrow as soon as the gun shop/Army-Navy store/pawn shop opens, get whatever you need to be ready for combat. We must not tolerate this one.”

Shiffer’s last post on the platform was posted at 9:29 a.m. on Thursday, 15 minutes after he tried to breach the FBI office in Ohio: “Well, I thought I had a way through bullet proof glass, and I didn’t. If you don’t hear from me, it is true I tried attacking the F.B.I., and it’ll mean either I was taken off the internet, the F.B.I. got me, or they sent the regular cops while.” The message ends there.

Shiffer’s other social media accounts show that he believed a number of rightwing conspiracy theories, including those that demonize transgender people.

In one tweet on a Twitter account with his name, he wrote, “We need to be ready for war against the communists who chemically nueter [sic] prebuscent [sic] children and call it gender transitioning, not bellyache about the arguments of 30 years ago. Save ammunition.”

In response to a tweet by Rep. Marjorie Taylor Greene (R-GA), Shiffer wrote: “Congresswoman Greene, they got away with fixing elections in plain sight. It’s over. The next step is the one we used in 1775.”

In response to a tweet from Donald Trump Jr. that suggested that Democrats were going to make up a new strain of COVID-19 in order to win midterm elections, Shiffer wrote: “Under no circumstances comply. We didn’t get this country through peaceful compliance-or peaceful protest.”

His accounts on Truth Social and Twitter have been deleted.