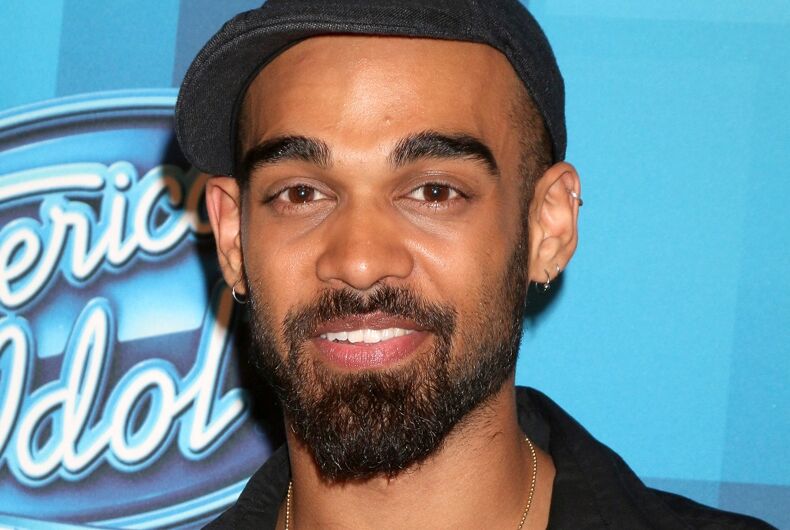 Sanjaya Malakar, the infamously ponyhawked teen troubadour from American Idol Season 6, has come out as bi.

Sanjaya, now 32, made his debut on the original and wildly popular Idol in 2006.

He broke the news on The Adam Sank Show podcast Monday.

Sanjaya knew at a young age he was somewhere to the right on the Kinsey scale, but “at the time of American Idol, I had a serious long-term girlfriend.”

When speculation swirled about the pretty 17-year-old’s sexuality, the popular verdict was “gay.” Sanjaya had to make a decision.

“Okay, well, now I have to say ‘no,’ because at this point, they’re forcing me to make a decision until I define myself.”

“It’s like, all of my publicists, they’re like, ‘Oh, just tell everyone you’re single, be ambiguous,’ you know? ‘No one needs to know anything about anything because you don’t want to lose your fans.’ And I’m like, ‘Okay, but why am I manipulating what I know myself? To figure out what kind of fans I’m gonna get? Because I’m still trying to discover who I am.”

“Because I grew up in a time when being called fa***t in school was the worst thing that could ever happen to you.”

It was one more lesson learned through Sanjaya’s seven-month Idol odyssey about the business of show.

The seventh place runner-up, now a pastry chef and bartender in Montana, experienced first-hand how contestants on the show are manipulated to meet producers’ expectations, regardless of talent.

One example was the infamous ponyhawk.

“I would literally go to Dean, the hairstylist, I would go to his studio the day or two before, and he’d have like four of five mannequin heads with wigs on them with hairstyles and be like, ‘What do you think?'” Sanjaya told Sank.

The week the stylist came up with the eye-catching ponyhawk pompadour, “My mom went in and was like, ‘This is ridiculous. My son is not a joke. I’m not going to have him walking around like a fool.’”

But according to Sanjaya, executive producer Nigel Lythgoe — who reality TV fans may know from his onscreen role as a judge on So You Think You Can Dance — convinced Sanjaya and mom to pull the trigger on the hairstyle, saying it would be a “media phenomenon.” Lythgoe couldn’t have been more right.

How is Sanjaya wearing his hair now?

“My hair is gone. All that stress and over-processing, now I’m bald. But luckily I have a nice shaped head.”

Asked by LGBTQ Nation why Sanjaya chose Sank to share his story, the host speculated: “I think the reason he decided to speak to me, perhaps, is because I don’t have people on my show to humiliate him.”

Republicans had all the advantages in the midterms. They’ve blown every one of them

Singapore to repeal colonial-era law against sex between men