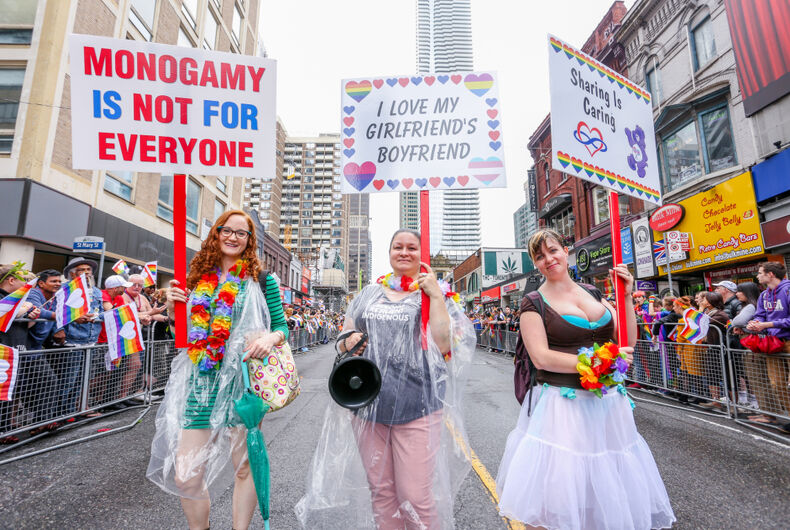 Polyamory has gradually become more normalized in the mainstream over the past few years. We’ve been seeing a lot more representation in media, and some celebrities have even opened up about their own polyamorous relationships. And we’re not talking about minor celebrities here — we’re talking major Hollywood A-listers like Will Smith or Megan Fox.

Despite all the conversation around polyamory, there still seems to be quite a bit of confusion as to what exactly constitutes a polyamorous relationship. Since polyamory can involve multiple people, it can get more complex compared to monogamy which only ever has two people involved. In this article, we’ll cover the different polyamorous relationship types and what defines them.

Related: Scientists say this is the key to making an open relationship work

Who Came Up With The Types of Polyamorous Relationships?

There is no global governing body for polyamorous relationship types (although it would be hilarious if there was). Because of that, the types listed here may vary compared to other sources and it’s by no means exhaustive. There may be slight differences in terminology, but these are essentially the most commonly discussed types – at least online.

In a hierarchical polyamorous relationship, there is typically a couple (usually called “primary partners”) who are each other’s top priority in their shared lives. The primary couple may live together, share finances, or even have children. They have also most likely defined their rules and boundaries when it comes to exploring other relationships.

Any additional persons they may be seeing (individually or as a couple) are typically called their “secondary” or “secondaries” if they are seeing multiple people. Depending on their relationship rules, the primary couple may not have a limit to how many secondaries they can have, so long as they remain each other’s primaries.

While there is no hierarchy in terms of importance or love, this group of people, typically called a “polycule”, don’t necessarily have to treat everyone equally. It only means that no third party can make any decisions about or influence others’ relationship dynamics. It’s up to you and the partners involved to discuss how you want to foster your unique relationship with them.

Unlike hierarchical and non-hierarchical polyamory, a triad has a limited number of people involved. As suggested by its name, triads involve three partners, where each person involved has a direct relationship with the other two romantically and/or sexually.

This type of polyamorous relationship is also sometimes referred to as “throuple”, which is a portmanteau of “three” and “couple.” It is not to be confused with love triangles, which rom-coms so famously depict as two people (usually men) pursuing the same person (usually a woman) in a rivalrous manner.

In triads or throuples, there are no rivalries or hierarchies. All three treat each other with equal priority and respect.

Similar to a triad, vee’s involve three people. A vee is when one person is in a relationship with two people, but those two people are not involved with each other.

Less of a structure and more of a dynamic, kitchen table polyamorous relationships involve a polycule who are on good-enough terms that they can sit around the kitchen table and have coffee with each other. While not everyone in this type of relationship dynamic is involved romantically or sexually, each person is emotionally connected to each other in one way or another.

For example, let’s say you are romantically/sexually involved with two partners. Those two partners may also have their own respective partners who you may not necessarily date (“metamours”). That said, your partners’ partners are also your friends. You all frequently spend time together, have dinner, coffee, play board games, etc.

However, the key difference here is that you are not close with your metamours. Essentially, you know your partners’ partners, but you don’t spend time with them on a regular basis like you would in a kitchen table polyamory setup.

The name “garden party” refers to how everyone is familiar with each other, and you’ll probably get together during special big gatherings like birthdays. But, beyond that, you won’t regularly spend time with your metamours.

Solo polyamorous people have multiple, committed relationships with different people but prioritize themselves when it comes to any major life decisions. They typically live alone, do not cohabitate or form families with their partners, make their own financial decisions, and are in full control of their own future. This is in contrast to a hierarchal polyamorous relationship wherein the primary couple share these decisions with each other.

Polyamorous relationships are not always clear-cut. The more people involved, the more unique dynamics come into play. Ultimately, it depends on what each person is comfortable with – structures, dynamics, rules, and boundaries vary from person to person and relationship to relationship. As long as everyone respects each other (and themselves), then you can have a healthy, happy, and fulfilling polyamorous relationship, no matter the type.