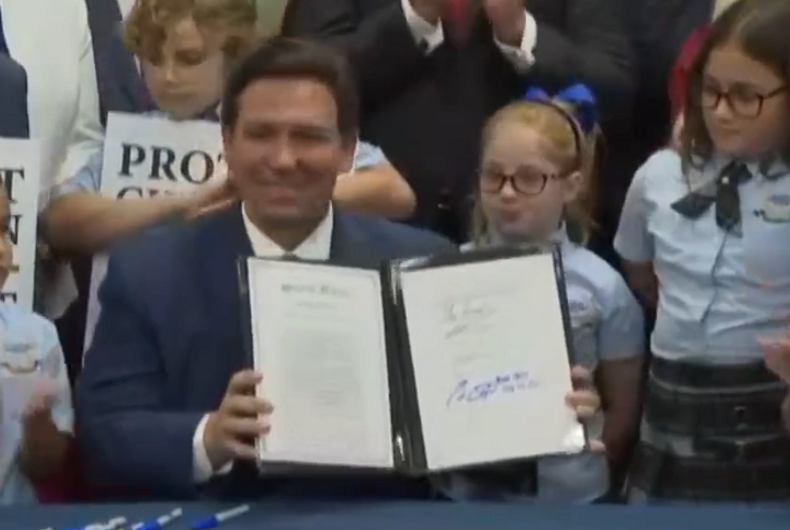 A coalition of states’ attorneys general, including out AGs from Massachusetts and Michigan, have filed an amicus brief in support of a lawsuit challenging the constitutionality of Florida’s discriminatory “Don’t Say Gay” law.

The lawsuit, Equality Florida v. DeSantis, was brought on behalf of students, parents, teachers, and LGBTQ rights groups. In the brief, filed in the U.S. District Court for the Northern District of Florida, 16 attorneys general support the suit and ask the court to deny Florida’s motion to dismiss.

The Parental Rights in Education Act (H.B. 1557) bans “classroom instruction . . . on sexual orientation or gender identity” in kindergarten through third grade, while also requiring the state education agency write new classroom instructions, to be determined, for standards that must be followed by grades four through 12.

In their brief, the attorneys general argue the law is an “extreme outlier” that lacks a “legitimate pedagogical purpose.” No other state educational law sweeps as broadly. Opponents say because the new law does not define many of its key terms, like “classroom instruction,” its implementation is forcing Florida teachers to censor themselves out of fear of prosecution.

The law also allows parents who disagree with a teacher or school district’s decisions to bring a civil claim to enforce the law’s prohibitions. That could potentially include a lawsuit brought against any individual who presents as LGBTQ.

“Florida’s hate-fueled law is the censorship of LGTBQ+ issues at a time when school communities should be creating an educational environment that is inclusive of everyone,” said AG Maura Healey of Massachusetts, an out Democrat who’s running for governor of the state.

“With my colleagues across the country, we are asking the court to put an end to this radical policy and protect LGBTQ+ young people and their families from further harm.”

According to the brief, state policies across the country allow educators to address LGBTQ issues, with educational decisions left to the discretion of schools and teachers.

Florida, by contrast, has chosen a starkly different path. “It stands alone in its censorship of instruction related to LGBTQ issues and in its imposition of legal liability on school districts that do not censor LGBTQ issues,” the brief reads.

The attorneys general also argue that Florida’s law will stigmatize and harm LGBTQ youth. According to the brief, research shows that a failure to provide LGBTQ-inclusive classroom instruction adversely affects LGBTQ students’ mental health and learning outcomes and leads to increased anti-LGBTQ bias. Further, the brief states, harms stemming from Florida’s law will extend beyond Florida’s borders, to children in the custody of other states that may be placed with families in Florida.

Michigan Attorney General Dana Nessel, a Democrat who is Michigan’s first openly gay top statewide official, says that the law poses a serious threat to LGBTQ students, who she says are particularly vulnerable to discrimination.

“This bill is an affront not just to educators, but also to LGBTQ+ students, especially those who may already be experiencing the stigmatizing effect of their identity at school,” Nessel said. “This bill is not motivated by the desire to limit inappropriate content in classrooms. It is meant to have a chilling effect on how educators do their jobs and may also violate the First Amendment rights of students and teachers alike. I gladly join my colleagues on this brief and hope it discourages other states, including Michigan, from considering similar legislation.”