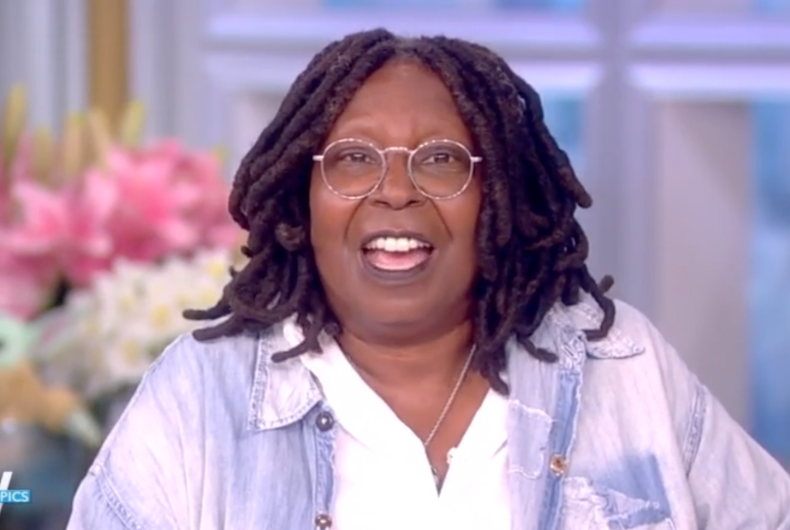 Daytime television’s all-women current events show The View has weighed in on the fight to codify same-sex marriage: it’s a good thing.

The panel agreed that the Respect for Marriage Act (RMA), passed by the House of Representatives on Tuesday, was a necessary next step in the effort to preserve marriage equality for LGBTQ Americans.

“Because I’m hetero, I’m eligible to get married,” said longtime host Joy Behar. “Why shouldn’t that pertain to everyone?”

The bill passed the House 267 to 157. Democrats voted unanimously for the measure, joined by 47 Republicans.

“The Dems want us to think that the Supreme Court at any moment could step in and overturn its opinions in Obergefell and Loving,” referring to the 2015 marriage equality decision and the 1967 ruling that legalized interracial marriages.

That didn’t sit well with Whoopi.

“You know, Jim Jordan, I know you don’t really pay attention to much, but I will say that what the Democrats seem to be running on is also protecting everyone’s rights regardless of whoever you love or whoever you’re married to, if you are married. I don’t know, but they’re trying to make sure that the rights you are so easily, you know, able to give away, we’re trying to hold on and say, actually, you can’t do that. Especially for a lot of folks who are also married interracially, which is coming up bobbing its ugly head around.”

After Jordan claimed during debate the RMA was “unnecessary and wrong,” out Rep. David Ciccilline (D-RI) responded he feared his husband could lose hospital visiting privileges if marriage equality was overturned.

Behar said she could relate.

“One of the things the gay guy who was speaking — I don’t know his name. He’s saying that if his husband’s in the hospital he can’t go in. That is the reason I got married, and I’m a heterosexual, and I’m married to a man — I think,” Behar joked. “You know, you never know.”

“Anyway, my point is, we got married. People say, why’d you get married? You’ve been together 30, 40 some-odd years. Well, because a gay person in my family was in the hospital and her girlfriend could not make a decision for her, and I saw that and I said, I can’t let that happen to me.”

Though marriage equality is a federal right in the U.S. following the 2015 Supreme Court ruling in Obergefell v. Hodges, RMA proponents argue the decision is in danger from the more conservative Supreme Court of 2022.

They cite Justice Clarence Thomas’s concurring opinion in Dobbs v. Jackson Women’s Health Organization, where he refers to Obergefell as a decision that the Court should reconsider now that it’s ruled against substantive due process rights.