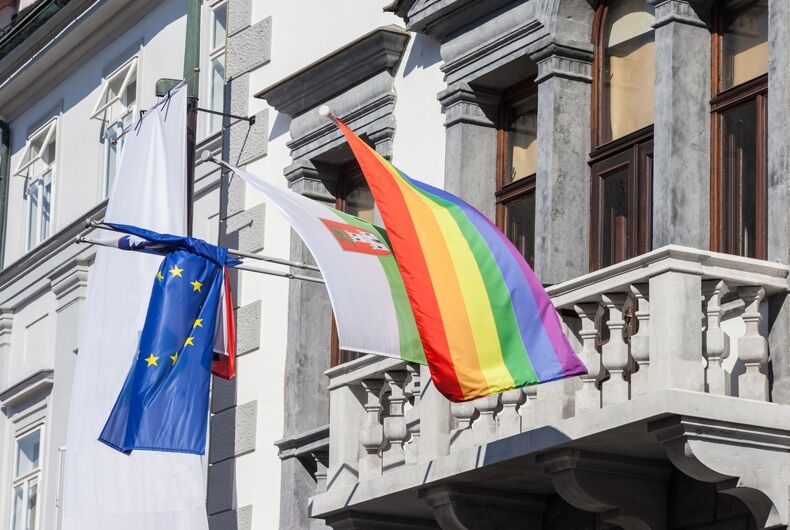 The city of Ljubljana, where the Slovenia constitutional court is located, flies the rainbow flagPhoto: Shutterstock

The central European country of two million has six months to come up with a plan for legal equality for same-sex couples when it comes to marriage and adoption, the court ruled this past Friday. The country could become the first former communist state to enact marriage equality in the world.

“This is a complete victory for us after long efforts of the civil society,” said Legebitra president Lana Gobec. Legebitra is an LGBTQ rights organization in Slovenia.

The court ruled on two cases involving the rights of same-sex couples.

Prime Minister Robert Golob of the Freedom Movement party (considered social liberals) said that the National Assembly would have a bill to vote on in “a week or two,” according to Le Monde.

“We promise to work to prepare and adopt legislative amendments as soon as possible to ensure equal rights for all,” the Freedom Movement said in a statement. The party has a plurality of seats in Slovenia’s National Assembly and formed a coalition government with The Left and the Social Democrats last month.

The country allowed domestic partnerships starting in 2006, and the Constitutional Court ruled in 2009 that they violated Slovenia’s constitutional ban on discrimination. The National Assembly tried to pass a bill legalizing marriage equality, but opponents of the bill petitioned for a national referendum on marriage.

In 2015, a referendum on marriage equality took place and 63.5% of Slovenians voted against it.

“It’s not over yet. Sooner or later the law will be accepted,” Violeta Tomic, a United Left lawmaker, said when the referendum failed in 2015.