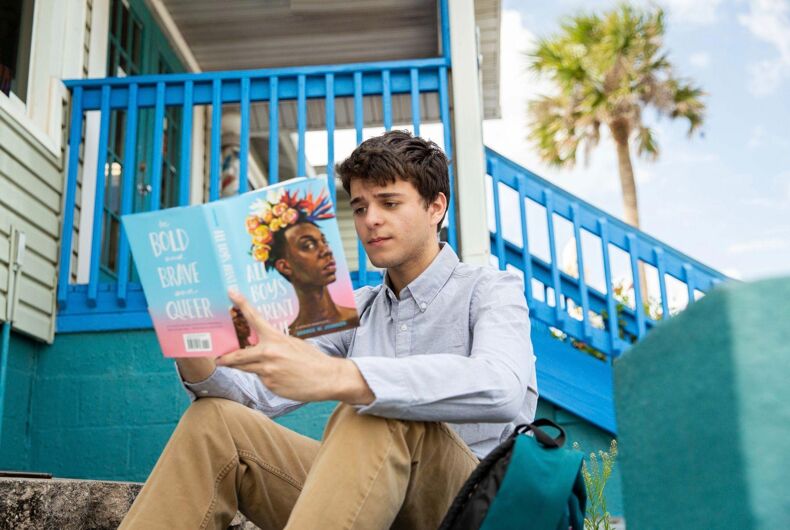 As soon as I cross state lines, I mask my queerness.

I attended a school-sponsored trip to the Smoky Mountains while in middle school a few years ago, to explore Tennessee’s vast countryside and stunning views. We traveled as a cohort, and I was lucky to have close friends on the trip, with whom I felt extremely comfortable sharing my sexuality. In my hometown of Chicago, I never felt unsafe expressing myself. It wasn’t a secret— I crossed my legs every time I sat, my painted nails reflected the Southern heat, and my octet-raising voice certainly wasn’t helping.

Related: Bisexual daughter cuts ties to her dad. He’s a GOP state senator who is “taking my rights” away

But in Tennessee, the stares started to pile up, from the staff at the hotels, the servers at the restaurants we ate at, and even the security guards whose job it was to make us feel safe. I bought the cheapest nail polish remover at a local drugstore; I uncrossed my legs whenever I caught myself falling into old habits; I cleared my throat before speaking to ensure it came across as masculine as possible. I was afraid for my physical safety.

As soon as the plane landed back in Chicago, I breathed a sigh of relief, sat at the bedside table and despite the exhaustion from the long flight, I repainted my nails.

As queer youth, we are forced to limit who we can be queer with and where. We code-switch whenever the situation demands it. We observe which teachers respect our pronouns, which friends say slurs too liberally, whether our parents were home or not. And now, states are adding to that burden – codifying those worries into law.

Today, an unprecedented amount of anti-LGBTQ laws are flooding state legislatures across the country. One after the other, conservative states are rushing to ban trans youth from participating in sports, ban comprehensive sex education in schools, undermine longstanding & federally-backed non-discrimination policies, and prevent gender-affirming medical care. On a national scale, LGBTQ youth are now having to determine for themselves whether our authenticity is worth risking our security.

As queer youth, we desperately need the government to take action and pass the Equality Act today. Whether or not we are entitled to LGBTQ rights has become dependent upon the geographical boundaries of where our feet stand. Today, in 27 states there are no explicit laws protecting us from discrimination and in 21 states it is still legal to discriminate against LGBTQ people in many spheres of public life, including education.

The Equality Act would protect LGBTQ people from protections on a federal level so that our rights are equal no matter where in the country we choose to live. It would expand federal civil rights laws to protect us from discrimination in employment, housing, credit, jury service, and federally funded programs, such as those for health and education, as well as public places and spaces. It would allow us to live as our most authentic selves.

I watched the Equality Act first pass the House of Representatives in 2019 through my phone’s tiny screen. For the first time, I felt great pride in my country, assured we were finally heading for the right track, oblivious to the onslaught of anti-LGBTQ laws that would soon spread across the country like wildfire in the years to come. Just as Pride month began this year, President Biden issued a proclamation in which he called on Congress to pass the Equality Act, which he said, “will enshrine long overdue civil rights protections and build a better future for all LGBTQI+ Americans.”

But currently, the legislation is languishing in the Senate. Despite repeated calls from LGBTQ advocates and the endorsement of the entire federal Democratic caucus, there has now been no action on the bill since the middle of last year. Supported by an overwhelming majority of Americans, the Equality Act still seems in danger of failure even as it nears the finish line in the Senate. We are on the precipice of finally ensuring LGBTQ can be themselves and live without fear of discrimination, no matter the state they reside in, but we can’t get there if our elected officials keep ignoring our rallying cries.

State lines will never define who we are. Queer people exist in every state, are here to stay, and we deserve the right to feel safe while doing so. As the list of dangerous anti-LGBTQ state legislations grows rapidly, the Senate has a responsibility to act now to swiftly pass the Equality Act for President Biden to enact into law.

Across the country, queer youth are watching closely for the day they no longer have to hide their true selves – their desire to play sports, dress how they choose, and access healthcare that affirms their gender identities. Just as flowers do not choose where they bloom, LGBTQ young people deserve the right to thrive everywhere we exist. The fight for equality must not die in committee nor across state lines.

Jorge Martinez is a Senior at Bennett Day School in Chicago, IL. Jorge is a community activist for queer voices and a youth ambassador with AMAZE.org.

Man sues library board over LGBTQ & antiracism books. He has the nuttiest argument possible.