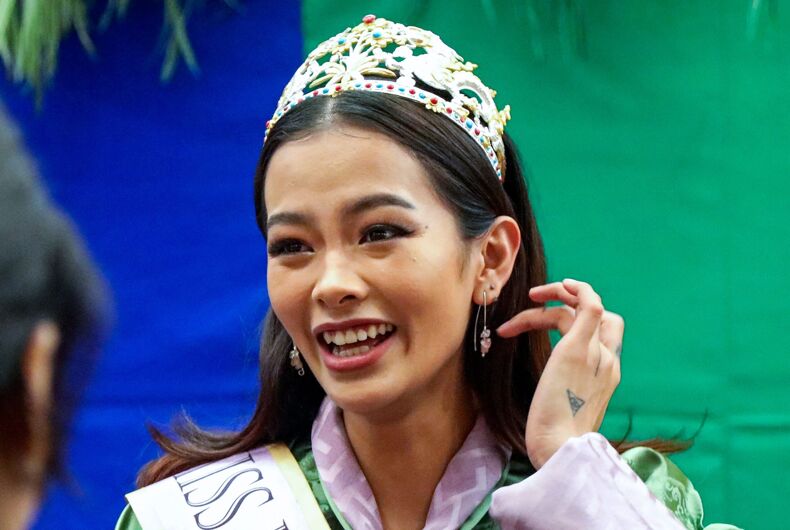 In this picture taken on June 30, 2022, Miss Bhutan 2022, Tashi Choden attends a pride event hosted in her honour in Thimphu. - Tashi Choden will not only be the first ever contestant to represent Bhutan at the famed Miss Universe competition -- she is also the Himalayan country's only openly queer public figure. Photo: (Photo by Namgay Wangchuk / AFP) (Photo by NAMGAY WANGCHUK/AFP via Getty Images)

In 2019, Tashi Choden decided that she was done with beauty pageants. She was going to focus on acting from now on. Her aunt, however, registered her for a pageant. In June this year, the 23-year-old – who identifies as genderfluid and queer – was crowned the first Miss Bhutan.

Miss Bhutan is one of the country-level pageants organized by the Miss Universe Organization. Winners from each country compete for the Miss Universe crown on an international stage. Choden’s win also marks Bhutan’s debut in the 71-year history of Miss Universe.

“Beauty pageants helped me love myself”

Modeling since the age of 15, Choden told LGBTQ Nation that in the initial stages of her career, she wasn’t as excited about beauty pageants. “I had a stereotypical view of beauty pageants,” she said.

However, when she went for her first pageant, she recounts, “I realized that there were so many aspects to it; how you grew as an individual really mattered.”

As a young queer person, Choden mentions struggling with her gender and sexual orientation. But, she says, “beauty pageants helped me develop self-love and self-acceptance.”

What makes a Miss Universe?

Paula Shugart, the President of the Miss Universe Organization, echoed Choden’s thoughts. She told LGBTQ Nation that the jury does not look for a “particular height or a particular shape” in the contestants.

“What I am looking for is when someone is on that stage, they are present; they are owning the space, and they’re feeling comfortable,” she says.

Further, it is important that contestants are passionate about their work, Shugart added. For example, she referred to the 2021 Miss Universe, Harnaaz Sandhu from India: “Harnaaz was so passionate about the menstrual equity program and making a difference,” said Shugart.

“Being a queer person in Bhutan is quite a huge deal”

According to Choden, “being a queer person in Bhutan is quite a huge deal.” Being a public figure – a model, especially – makes it even bigger.

It is only last year that Bhutan amended its penal code to decriminalize consensual homosexuality after a battle that started almost a decade ago. However, queer people in Bhutan do not have legal protection from discrimination or other civil rights like marriage.

However, Choden says that Bhutan has come a long way post decriminalization. The most notable change, she says, is how people are more “open to the idea of a person being queer.” According to her, this cultural shift can be seen in the decreasing stigmatization of queer people and an increase in the number of queer people coming out.

Her own journey of coming out was a fairly intriguing one. Coming from, in her own words, a “conservative family”, it certainly wasn’t easy. Choden told LGBTQ Nation that she first came out as a bisexual woman on social media, which then led her to read more about genders and sexualities. That’s when she started identifying as genderfluid.

Coming out to friends was the easier task, says Choden. The harder part was dealing with her family, which labeled her the “black sheep” of the family after she came out to them on June 2 last year, when Pride Month had just begun.

Her reply was simple. “I am the rainbow sheep of my family,” she told her grandmother and aunt.

“When you come from a conservative family, and especially when you are a woman, they want you to get married,” she recollects, “you need to have that man in your life to depend on.” But Choden – being the independent person that she is – was clear that she did not want to rely on anyone.

“I can work for myself; I can feed myself,” she said.

When she came out to her family, they had a “strong reaction to it”, Choden says. As a result, she decided it was for the best to give them the time required to process that their child was queer. Eventually, both her grandmother and aunt turned around.

“Now they’re very accepting of me and the relationships that I’m having,” she told LGBTQ Nation.

“A path to walk towards a goal”

Shugart believes that Miss Universe as an international platform would be crucial to amplifying Choden’s voice. Further, she added, the platform has been at the forefront of LGBTQ rights. For instance, Shugart talks about a 2012 rule change that allowed transgender women to participate in the pageant.

Media reports mention that the rule change might have been a result of the outrage against the disqualification of Jenna Talackova, a Canadian model and television personality who also identifies as a transgender woman. Talackova was disqualified from the pageant in 2012 for being transgender. While Talackova was prepared to wage a legal battle, the organization lifted its ban on transgender contestants before the case reached court.

The 2012 rule change, according to Shugart, is a reflection of how the Miss Universe Organization adapts to its time. As a result of this rule change, Ángela Ponce, a Spanish model who also identifies as a transgender woman, could compete in the pageant. She was crowned Miss Spain 2018 but did not win the finals.

Having won the Miss Bhutan 2022 crown, and all set to shine on an international stage, Choden is excited to use this opportunity to make a difference for women and LGBTQ people in Bhutan.

“We have a very wrong conception that women need motivation,” she says, “What they need is a path to walk towards a goal. A platform to voice our principles.”

According to Choden, when she first started modeling, she was the only queer model who was “very vocal about [her] sexual orientation.” Although she wasn’t a part of any queer organization, she extended support to any organization that needed help.

“Whenever there is an LGBTQ-related event, I go there and make it a point to say what I believe in, what my principles are and what my morals are,” she told LGBTQ Nation.

She wants to bring what she has learned from being queer in Bhutan to the Miss Universe stage, and bring back what she learns from Miss Universe to the LGBTQ persons in Bhutan.

“There’s a beauty in learning, and sharing what you know,” she says.

Editor’s Note: A reference to Harnaaz Sandhu’s profession was incorrect and has been removed.