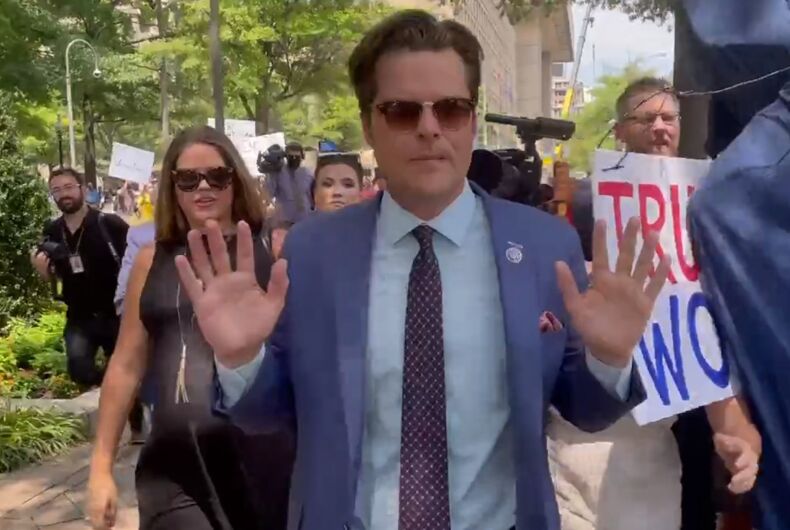 Rep. Matt Gaetz (R-FL) tried to argue that LGBTQ people should oppose abortion – even in cases of rape – so that there’ll be more babies for gay couples to adopt.

“What’s more likely,” Gaetz asked, “a lesbian woman having an unwanted pregnancy as the consequence of a sexual assault or a gay couple adopting in America?”

Gaetz was questioning HRC legal director Sarah Warbelow at a House Judiciary Committee hearing on the threat to freedom caused by the Supreme Court decision in Dobbs v. Jackson Women’s Health Organization, which overturned Roe v. Wade and ended the federal right to an abortion in the U.S. The decision attacked the very idea that individual freedoms exist even if they’re not explicitly mentioned by the Constitution, and Warbelow testified about the impact on LGBTQ rights.

“I think that’s impossible to know,” Warbelow answered. Many instances of sexual assault go unreported, gay couples who want to adopt might be dissuaded from even trying by discriminatory laws, and good statistics about LGBTQ people are often hard to come by. Moreover, it’s unlikely Warbelow came prepared with numbers to answer Gaetz’s bizarre question.

“You would concede that it’s certainly more likely in America that you have same-sex couples adopting than you do lesbians having unwanted pregnancies as a consequence of sexual assault, right?” Gaetz pressed on.

Warbelow pointed out that he didn’t seem to understand that a lot of same-sex couples don’t go the adoption route when forming a family so it’s really hard to get the numbers, and then Gaetz got even weirder.

“If a woman is with men and women, then they’re bisexual, right?” Gaetz asked. Warbelow said no, since a bisexual woman can have a monogamous relationship or relationships with just one gender and still be bisexual. The word describes attraction to more than one gender, not necessarily relationships.

“I don’t ask this to be dismissive, but you’re saying that lesbian women are also capable of being into men?” he asked, and she said that she was talking about bisexual women, not lesbians.

Gaetz then went back to his main point: lesbian sexual assault victims are not as important as gay couples who want to adopt.

“I worry that if the LGBTQ community and if the advocacy organizations somehow reorients to be a pro-abortion enterprise, that that could actually result in fewer same-sex having access to the family formation that gives them fulfilled lives,” Gaetz said. “Are you concerned about that?”

“What I would be concerned about is forcing women to carry a pregnancy simply to satisfy another couple’s desire to have a child,” Warbelow answered. “There are many methods of family formation, many same-sex couples use fertility treatments, assisted reproductive technologies in addition to adoption.”

Gaetz: What’s more likely, a lesbian woman having an unwanted pregnancy as the consequence of a sexual assault or a gay couple adopting in America? pic.twitter.com/cgSCjRxRvM

Let's be clear: same-sex couples can and do create families in many ways, including adoption and more.

No person should be forced to have a child against their will just to benefit another. pic.twitter.com/n5TVIH7WtP

While Gaetz mentioned his pro-LGBTQ record as a member of the Florida state house, that record hasn’t carried over to Congress. He has gotten a score of zero for the last two Congressional sessions on HRC’s Congressional Scorecard, showing his strong opposition to LGBTQ equality.