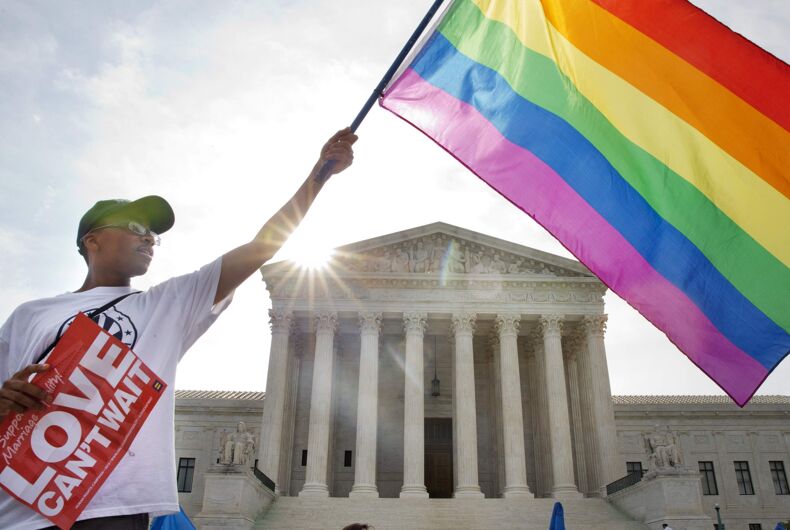 A man celebrates the legalization of same-sex marriage in 2015. Photo: Associated Press

In the wake of the Supreme Court’s historic decision last month striking down Roe v. Wade and Justice Clarence Thomas’s explicit call for the court to reconsider Obergefell v. Hodges, LGBTQ activists are already preparing for SCOTUS to end the constitutional right to same-sex marriage.

As BuzzFeed News reporter David Mack points out, “All it takes is one novel case — the right case with the right questions — to intrigue enough justices in the Supreme Court’s conservative supermajority” to overturn marriage equality in the U.S.

“Believe me: all the LGBTQ legal and advocacy groups are on alert,” says National Center for Lesbian Rights Legal Director Shannon Minter.

Though there is no immediate threat to marriage equality on the horizon LGBTQ advocates are on high alert. COLAGE, Family Equality, GLBTQ Legal Advocates & Defenders (GLAD), and NCLR recently released a guide for LGBTQ families on the impact Dobbs v. Jackson Women’s Health Organization could have on same-sex marriages.

“We’ve seen early reports of massive calls to estate planning attorneys, people who are specialized in LGBTQ law, seeing an uptick in consultations,” said Kendra Johnson with Equality North Carolina. “I’ve seen different seminars already being hosted on how to protect your families in light of Roe. So, there is great fear and trepidation in the community.”

Earlier this month, Lambda Legal, GLAD, the National Center for Lesbian Rights, and the Transgender Law Center issued a call to expand the Supreme Court and introduce a code of ethics for justices. And a public hearing before the House Judiciary Committee billed as “The Threat to Individual Freedom in a Post-Roe World” has been scheduled for July 14.

David Stacy, the government affairs director for the Human Rights Campaign, points to renewed efforts to repeal the federal Defense of Marriage Act (DOMA) which was ruled unconstitutional in 2013. Post-Dobbs, Stacy wants to see the Respect for Marriage Act passed, which would amend DOMA and guarantee federal recognition of same-sex marriages, even if a couple lives in a state that bans same-sex marriage.

Sounding a grim note, Equality Foundation executive director Fran Hutchins considers a potential post-Obergefell future in which advocates would once again have to try to defeat same-sex marriage bans on a state-by-state basis.

“It’s exhausting to even think about trying to do this again in the environment that we’re in now, in this like post-Trump authoritarian renewal of the culture war moment,” she said. “I just don’t want to. I don’t want to do it. I don’t think we should have to do it.”

Minter, meanwhile, is also thinking about a more grassroots approach.

“On a personal level, I’m doing what I imagine others are doing, which is — I haven’t talked to my family or straight friends about these issues in a long time, and I am back to doing it,” she said. “All my family members know, ‘Hey, we’re concerned that these protections may be under attack and I’ve asked you to do this before in the past and I’m asking you again now. Vote.’”