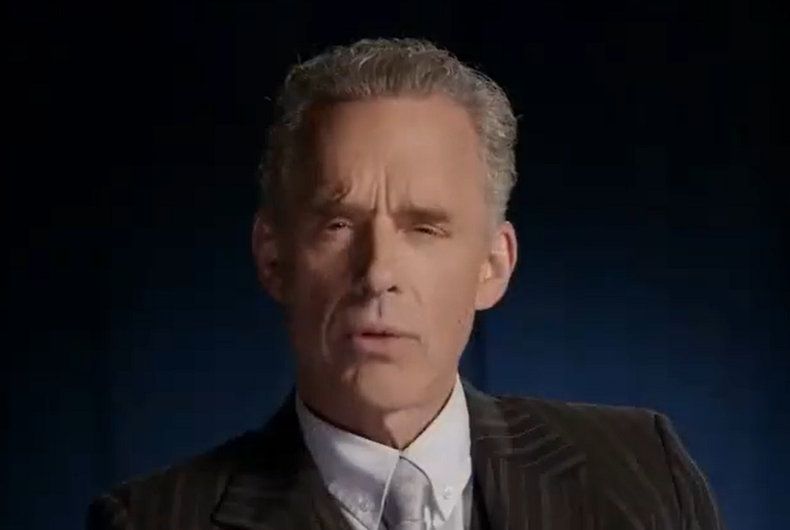 People have had a field day – er, week – mocking a video made by anti-LGBTQ Canadian professor Jordan Peterson after he got suspended from Twitter for deadnaming actor Elliot Page.

Peterson published a tweet last week when he wrote for his 2.8 million followers: “Remember when pride was a sin? And [deadname] Page just had her breasts removed by a criminal physician.”

Peterson got suspended for that tweet since deadnaming violates Twitter’s policy on harassment and hate speech. According to his daughter, he was told to delete that tweet if he wanted back on the platform.

Instead of just deleting it, he made a meme-able video whining about Twitter’s rules, where he claimed that he “would rather die” than delete his tweet about Page.

“What rules you sons of bitches? Exactly? Precisely? Because such things matter when the accusations start flying,” he said.

“I’m not taking down that tweet or acknowledging that my tweet violated the Twitter rules,” he said. “Up yours, woke moralists. We’ll see who cancels who.”

Of course, the over-the-top video inspired a lot of mockery on the platform. Many focused on the “up yours, woke moralists” bit.

I CAN'T BREATHE THIS IS THE FUNNIEST THING I'VE EVER HEARD pic.twitter.com/B3RIrqq2nm

Jordan Peterson so easily sounds like a villain. I'd say it's not even funny, but it's extremely funny pic.twitter.com/BfOoGRgwV0

i edited that jordan peterson video into a CONTROL cutscene pic.twitter.com/UtZubmzsRx

Hope this hasn't been done yet. pic.twitter.com/Rhvy824g9y

Up yours Dr Freeman pic.twitter.com/dfCpGwlGSK

Others thought the “what rules, you sons of b**ches” part was funnier.

Everyone keeps talking about the "up yours" Jordan Peterson clip and neglecting an even FUNNIER part of that video pic.twitter.com/XDr3JonWrQ

I think it's funny he says this like it's some big own, but, like, it's literally plainly written in the rules pic.twitter.com/4Fipp68ZWY

There was also the “I would rather die than” delete the tweet part. Peterson’s account is now back online and the offending tweet is no longer there, so many speculated that he did delete the tweet even though he continues to live.

jordan peterson: “i’d rather die than call Elliot Page by his name” pic.twitter.com/lhnIKbXAA3

Jordan Peterson: I would rather DIE than delete that tweet.

Others remixed the video.

Jordan Peterson has some thoughts pic.twitter.com/eOODszanon

I turned Jordan Peterson's latest video in to an interview pic.twitter.com/JaDy29mTk9

Some people mocked Peterson in general because he styles himself a self-help guru with his book 12 Rules for Life yet melts down when he has to follow the same rules everyone else has to follow.

He is just that powerful.

The full video is below.