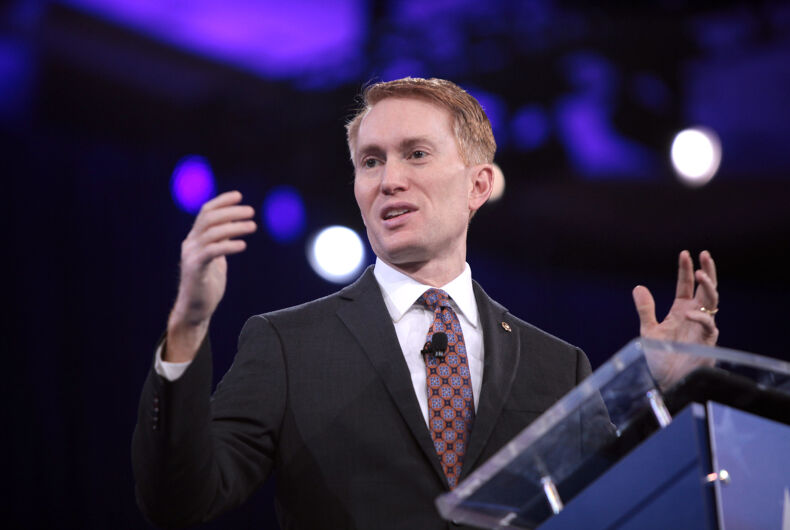 Sen. James Lankford (R-OK) is the latest Republican to come out against the Respect for Marriage Act.

Lankford appeared on the Family Research Council podcast “Washington Watch with Tony Perkins” Wednesday to announce he will “absolutely oppose” the legislation.

“I believe marriage is between a man and a woman,” Lankford said. “That’s not just a biblical concept and a worldview concept, but that’s a historic concept, as well.”

Ten Republican senators have now indicated they’ll vote against the bill, while 35 are undecided or haven’t announced their intentions.

Reasoning varies among those opposing the legislation.

Sen. Steve Daines (R-MT), says the RMA is “another attempt by Speaker Pelosi and the Democrats to distract the American people from the inflation crisis, energy crisis, and the southern border crisis they’ve created.” Sen. John Boozman (R-AR) claims the bill is “an attempt by Democrats to score political points by manufacturing hysteria and panic,” while Sen. Marco Rubio (R-FL) called the RMA a “non-issue” that he’ll nevertheless oppose.

Tax-exempt groups that advocate for traditional marriage “will be challenged on their tax policy and will immediately become a target of this federal government.”

Lankford claims left-wing groups “are no longer saying, ‘We demand recognition’ of same-sex marriage. Now they’re saying, ‘We’re going to crush anyone that opposes our belief in gay marriage’.”

“They want to take it the next step and then use” the bill “as a weapon [against] others” after the RMA passes, Lankford predicted.

Johnson leavened his support with some a la carte logic from colleagues in opposition.

All about the nonbinary symbol