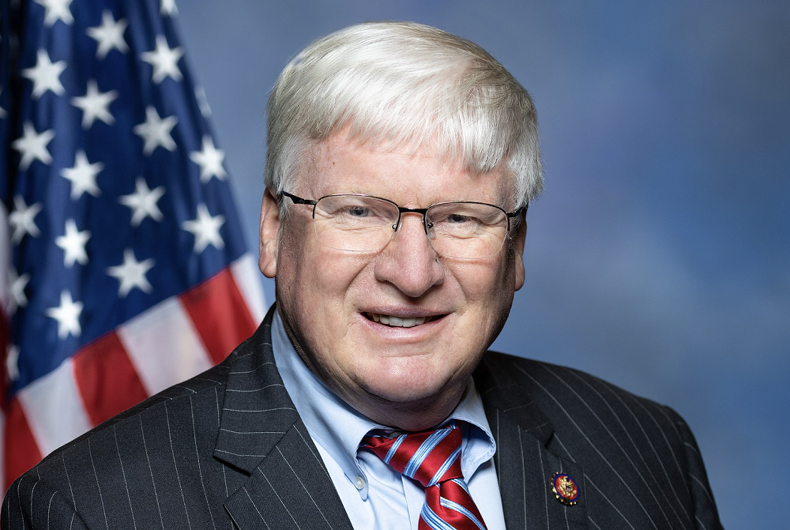 A Republican lawmaker accused the Biden administration of trying to “run down Christianity” while he ranted about his colleagues and embassies that honor June as, what he called, “gay month,” which he said would lead to other countries thinking that being gay makes people rich.

“There are apparently some congressmen who consider June ‘gay month,’ and they were flying the gay flag over American embassies,” Rep. Glenn Grothman (R-WI) complained on an Intercessor For America livestream last week.

That’s when his rant turned bizarre: “You can imagine if you’re in a foreign country and you see the American embassy and you view it as representative of the American government, representative of the hope America is to the world, and you see the gay flag? It’s like, ‘What’s that? Well, apparently, maybe that’s the secret to America’s wealth and prosperity.’ So it’s just absolutely a horrible thing.”

Grothman also denounced the LGBTQI+ Data Equality Act, which the House passed last month. If passed by the Senate and signed by the president, the bill would require over 100 federal agencies to assess their survey methods to see if they should be asking about LGBTQ identities. Grothman called the bill “repugnant.”

“Can you imagine asking an eight-year-old child, ‘What is your sexual preference?’” Grothman said. “But that’s what they want. I’m sure they want it to break down any innocence that the children have.”

“And we have to ask what they had in their mind and why they are doing it and why the Democrat Party is so owned by the gay lobby that every single Democrat voted to say, ‘Yes, we think a four-year-old, a six-year-old, an eight-year-old, a 10-year-old ought to be asked what their sexual preference is.’ It could be like a transgender or whatever. It’s just another example of the moral decline that is being encouraged by the government.”

Grothman also said that the Biden administration is giving grants to organizations “to promote atheism” abroad, but he didn’t name anyone receiving such grants or what agency is giving them. out.

“Right now they are giving grants to nonprofit organizations around the world to promote atheism,” he said. “In essence when we promote atheism, we are telling people in other countries that America’s success was due to not believing in God.”

Grothman was first elected to the House in 2014 and hehas consistently gotten a score of “0” on HRC’s Congressional Scorecard, showing his consistent opposition to equality for LGBTQ people.