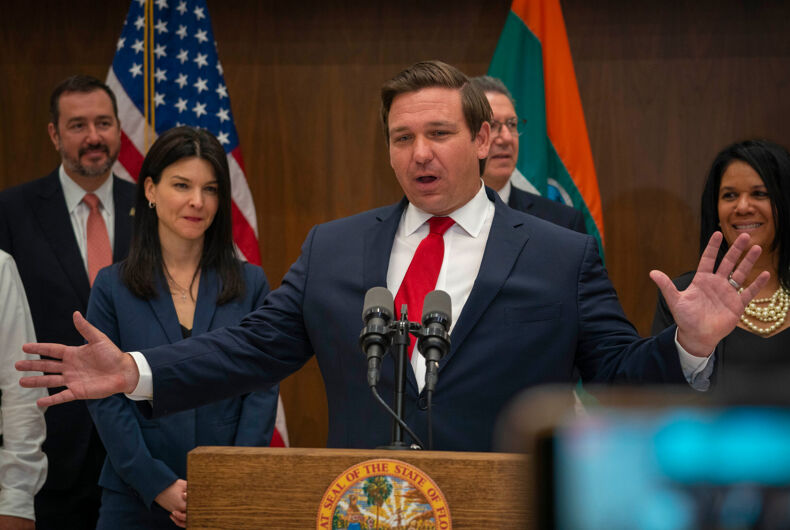 Florida Gov. Ron DeSantis (R) is feeling his oats after his tussles with the Walt Disney Company over anti-LGBTQ legislation. The would-be presidential candidate has declared war on “woke” businesses and schools in the state – and he’s using every tool at his disposal.

DeSantis revoked tax breaks for Disney and directed authorities to investigate a Miami drag bar, but now he’s casting a wider net by ordering his administration not to invest funds in “woke” corporations.

Pension fund managers will be prohibited from using environmental, social, and governance (ESG) ratings when deciding which companies to invest government funds into. The ratings are a popular and common method for potential investors to see a corporation’s political and social stances, their environmental impact, and other good management standards.

Multiple funds are available for investment that only include shares of companies with high ESG ratings. They allow investors to ensure they aren’t buying into oil and gas, tobacco, weapons manufacturers, and similar companies.

“We want them [fund managers] to invest the state’s money for the best interests of the beneficiaries of those funds, which is, again, the people that are retired cops and teachers and other public employees,” DeSantis said Wednesday during an appearance at a Tampa restaurant.

The initiative is being supported by the religious right and hate groups, including at least one that had their PayPal account frozen.

PayPal’s ESG considerations include building “a more financially inclusive and interconnected world is the foundation of our values-led culture, which is grounded in Inclusion, Innovation, Collaboration and Wellness across our communities, workforce and strategies.”

DeSantis blamed activist employees who “believe they’re entitled to have their employer basically emote the same political values as they do.”

“The problem is that, then the inmates are running the asylum,” he said.

Managers for the state oversee approximately $250 billion in funds. But the State Board of Administration (SBA) has already said that they don’t use ESG ratings when making determinations.

“Neither the SBA nor its managers use ESG factors as a way to screen or limit the available investment opportunity set,” Emilie Oglesby, a spokeswoman for the State Board of Administration, told the Miami Herald in June.

Florida taxpayers are suing DeSantis for potentially saddling them with over $1 billion in debt after he revoked Disney’s special zoning agreement after the company criticized his Don’t Say Gay law.

The governor has tried to position himself as the most conservative contender for a potential presidential bid in 2024 despite former President Donald Trump’s oft-stated intention to run again. DeSantis has tried to woo Trump supporters with his nonstop attacks on the LGBTQ community.

Tuc Watkins on gay dating after 50 in Netflix’s “Uncoupled”