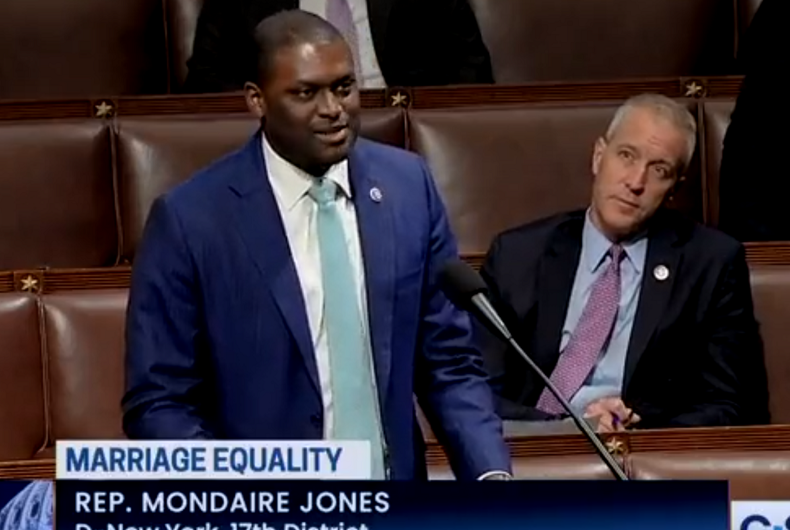 With the U.S. House of Representatives expected to vote on The Respect for Marriage Act on Tuesday afternoon, members of Congress took to the floor to debate the bill.

The Respect for Marriage Act would officially repeal the Defense of Marriage Act (DOMA), the 1996 law that forbade the federal government from legally recognizing same-sex marriages. In its place, the act would require the federal and state governments to recognize same-sex marriages as long as they occurred in states that offer them. If any state refuses to recognize such marriages, the act says, the spouses can sue.

The bill was introduced on Monday by House Judiciary Committee Chairman Jerrold Nadler (D-NY), Senator Dianne Feinstein (D-CA), Congressional LGBTQ+ Equality Caucus Chairman David Cicilline (D-RI), Senator Tammy Baldwin (D-WI), and Senator Susan Collins (R-ME). Both Cicilline and Baldwin are members of the LGBTQ community. It has the backing of 12 other congressional Democrats including the chairs of the Congressional Democratic, Black, Hispanic, Asian Pacific American, and LGBTQ Equality Caucuses. Collins was the only Republican to co-sponsor the bill.

The House is expected to pass the bill, which was introduced in direct response to Justice Clarence Thomas’s call for the Supreme Court to reconsider Obergefell v. Hodges, the 2015 decision establishing the constitutional right to same-sex marriage.

Speaking from the House floor on Tuesday, Cicilline railed against House Republicans who called the bill unnecessary. “If it’s not necessary, then vote for it. If you’re right that we’re worried and we shouldn’t be, reaffirm it. But don’t hide behind that to justify your refusal to vote for marriage equality in this country.”

Cicilline to Jordan and other House Republicans: "If it's not necessary, then vote for it … don't hide behind that to justify your refusal to vote for marriage equality." pic.twitter.com/DKlyC3Zkbn

Rep. Mondaire Jones (D-NY), who is gay, recalled how he cried tears of joy when New York legalized gay marriage in 2011. “Since Obergefell, nearly 300,000 same-sex couples have been married. Imagine telling the next generation of Americans, my generation, that we no longer have the right to marry who we love. Congress can’t allow that to happen.”

He also called for expanding the Supreme Court.

Rep. Mondaire Jones talks about the significance of the Obergefell decision to him as a gay man and calls on Congress to expand the Supreme Court pic.twitter.com/gMAaRxAv58

“The Republicans wanna talk about anything but marriage equality today,” out Rep. Sean Patrick Maloney (D-NY) said. “It’s almost like they don’t have any good arguments to make on marriage equality.”

Rep. Mahoney: "The Republicans wanna talk about anything but marriage equality today. It's almost like they don't have any good arguments to make." pic.twitter.com/uYqKkWNXzs

Earlier, Rep. Jim Jordan (R-OH) had dismissed the bill as “simply the latest installment of the Democrats’ campaign to delegitimize and attempt to intimidate the United States Supreme Court.” Later he railed against “attacks” on so-called crisis pregnancy centers which he says have occurred in recent weeks. Rep. Chip Roy (R-TX) accused Democrats of using marriage equality to distract from inflation, illegal immigration, and crime.

Jim Jordan dismisses the marriage equality bill as "simply the latest installment of the Democrats' campaign to delegitimize and attempt to intimidate the United States Supreme Court." pic.twitter.com/RGpyJM1EQR

Other LGBTQ members of Congress weighed in with statements. “As the first openly gay Afro-Latino in Congress, I am honored to join Chair @RepJerryNadler and the Equality Caucus in co-leading the Respect for Marriage Act,” tweeted Rep. Ritchie Torres (D-NY). “The right to marry, regardless of race and gender, is too fundamental to be stripped away by the far right.”

“From what we’ve seen in the last few weeks, it’s clear all Americans face significant threats to our individual freedoms that go beyond making our own health care choices without the interference of politicians,” Rep. Sharice Davids (D-KA) said in a Monday press release. “Since being sworn into Congress, I’ve made it my mission to work for all Kansans no matter what party they support or who they love. I urge my colleagues to join me in protecting our basic human rights, including the right to marry.”

“The idea that we could lose the freedom to marry is chilling to most Americans and runs contrary to our shared values,” said Rep. Chris Pappas (D-NH) in a press release. “This legislation would make sure that our government, at both the state and federal level, reflects the diversity, decency and spirit of the American people. I hope my colleagues on both sides of the aisle will listen to their constituents and defend every individual’s freedom to be themselves, love whom they want to love, and marry the person of their choosing.”

In a video posted to Twitter, Rep. Angie Craig pointed to the irony of some Republicans’ opposition to same-sex marriage.

“My wife and I, we have four sons… The irony is that today a number of my colleagues who are on their damn second or third marriage are now saying that I shouldn’t be able to be a family unit and be protected under the law.”

7 years after marriage equality became recognized federally, Republicans are once again targeting same-sex marriages, including my own. It’s outrageous that we have to vote on this – but until my colleagues respect the right for folks to marry who they love, it’s sadly necessary. pic.twitter.com/JNJBPVVOCD