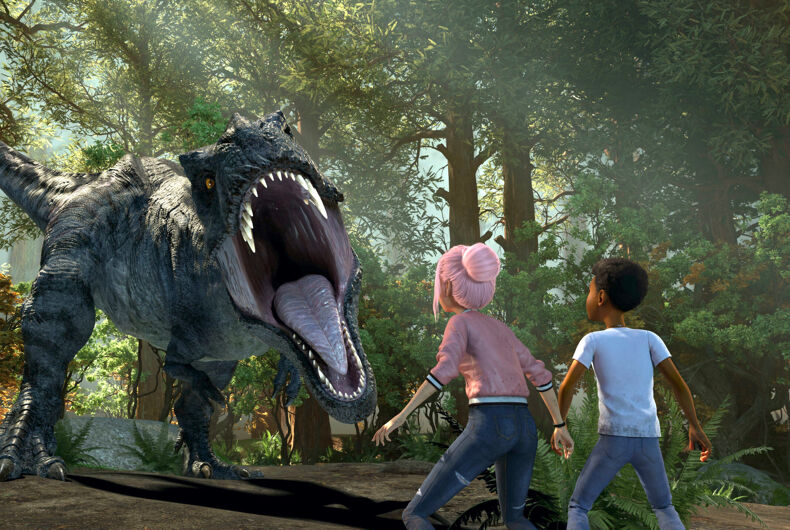 Netflix picked up some earned media today when the anti-LGBTQ One Million Moms targeted the streaming platform with a new petition, just in time for the premiere of gay dating romp Uncoupled starring Neil Patrick Harris.

According to Cole: “Dead End: Paranormal Park (rated TV-Y7) is about ‘two teens and a talking pug [who] team up to battle demons at a haunted theme park – and maybe even save the world from a supernatural apocalypse,’ as described by Netflix.”

“In addition to its demonic storyline, an episode of the show includes two teen boys who have a crush on each other. They are encouraged by an older lesbian couple to move past the awkwardness and get to know each other. They are affectionate toward one another and eventually end up being honest about their feelings.”

The animated series from Hamish Steele based on his DeadEndia graphic novels dropped in June.

Cole continues: “Jurassic World Camp Cretaceous (rated TV-PG) is about ‘six teens [who are] invited to attend a state-of-the-art adventure camp on Isla Nublar [and] must band together to survive when dinosaurs break out of captivity,’ according to Netflix.”

“It is labeled as a ‘Family Watch Together TV’ program. However, the series recently included two of the main female characters confessing their love for one another, embracing, and kissing. Their friends cheer on their newfound relationship.”

“It is irresponsible of Netflix to create and feature these homosexual relationships between some of the shows’ main characters,” Cole advises members. “Parents who are not already aware of Netflix’s agenda, please be forewarned now. With such a liberal push in children’s entertainment, it is obvious where Netflix stands. Netflix wants to be politically correct instead of providing family-friendly programming.”

Cole motivates Moms to “TAKE ACTION: Please sign our petition urging Netflix to pull the LGBTQ episodes of these two animated series immediately and to cancel the inappropriate programming conservative parents find concerning. Then please share with your friends and family.”

OMM’s petition reads: “I do not agree with the demonic nature of the dark series ‘Dead End: Paranormal Park‘ or the LGBTQ content Netflix is pushing on young audiences in this series and in the ‘Jurassic World Camp Cretaceous‘ series. I urge Netflix to stay away from controversial topics and cancel ‘Dead End: Paranormal Park‘ and to no longer include the lesbian relationship in ‘Jurassic World Camp Cretaceous.’ I also urge Netflix to pull the LGBTQ episodes of these two animated series immediately. I encourage Netflix to take this request seriously or families will be forced to find another streaming service to view together.”