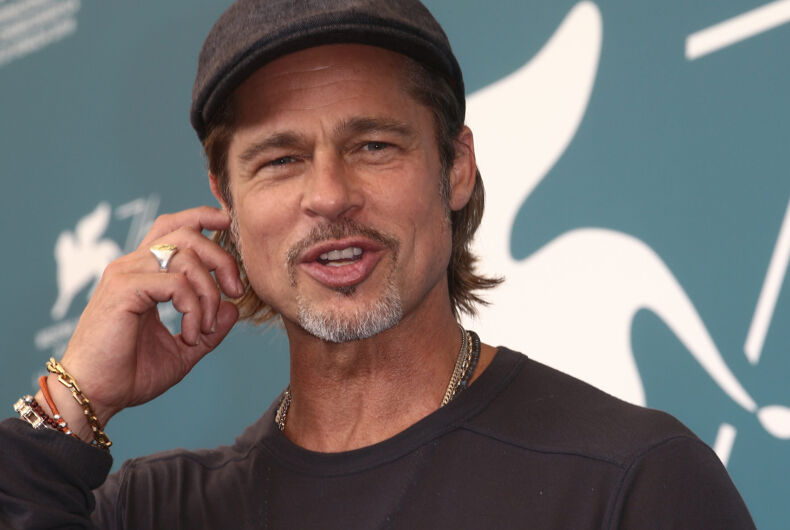 That was the consentement from French Vogue Tuesday when Brad Pitt walked the red carpet in Berlin for his new movie Bullet Train — in a skirt.

Pitt doffed pants for a brown linen jacket and skirt paired with a pink linen shirt, unbuttoned to reveal a gold pendant. A pair of biker boots showed off the 58-year-old’s shin tattoos; tortoiseshell sunglasses topped off the look.

The skirt turn follows recent trends on the catwalk at Fashion Week Spring/Summer 2023, including looks by Thom Browne and Egon Lab.

Brad Pitt’s linen outfits were custom-made by the artist and Anecho designer Haans Nicholas Mott, a rep for the designer confirmed https://t.co/gaNA49PHj6 pic.twitter.com/HV2lCc3SYP

“By making this genderfluid fashion statement that has already been validated by many male icons,” Vogue gushed in translation, Pitt “is helping push opinions forward. Bravo Brad!”

Fans and fashionistas weighed in online, where opinion was decidedly Mx!

What is even happening? From the neck up, he's Brad Pitt. From the neck down, a homeless woman muttering to herself on the L train. Is this…fashion? https://t.co/GK2JFZbjvL

Hell no! Oh HELL NO!
Question is – what is it doing for him? Really? What man would wear this outfit – let alone on a "Red Carpet"? Over all this 💩. #BradPitt WTF is wrong with you? https://t.co/KXhofTm2Km

i can’t believe i’m about to compliment brad pitt, but this outfit is actually so nice

Dear #BradPitt please get a new stylist. We love you but… Gray Gardens Chic is not a thing! https://t.co/3dZj5Cakxd

You had me at Brad Pitt!

The people saying Brad Pitt isn’t wearing a skirt, but a kilt are like nerds saying “that’s not a dragon, it’s a wyvern”.

Yet another #Hollywood male celebrity perpetuating the feminization of men
WTF is all I have to say #BradPitt has fallen a long way from #TylerDurden https://t.co/LbeFEhxeBb

And you wonder why the kids in this world are puddled, well they only have to look at how bloody ridiculous you look.

Brad Pitt could be in a barrel over his shoulders & it would do it for me. Actually his epic legs are def doing it for me! 😂

Brad Pitt would do it for me in a burlap bag.

Brad Pitt could wear a shower curtain and he'd still be okay by me!

I love that Brad Pitt is wearing a skirt. Way to break gender stereotypes. We need more of this.

Has Brad Pitt changed his pronouns yet? https://t.co/qdbIXHWlwW

Sorry, skirt-haters, but there's no way for Brad Pitt to not be hot.

Here are the 157 Republicans who voted against marriage equality