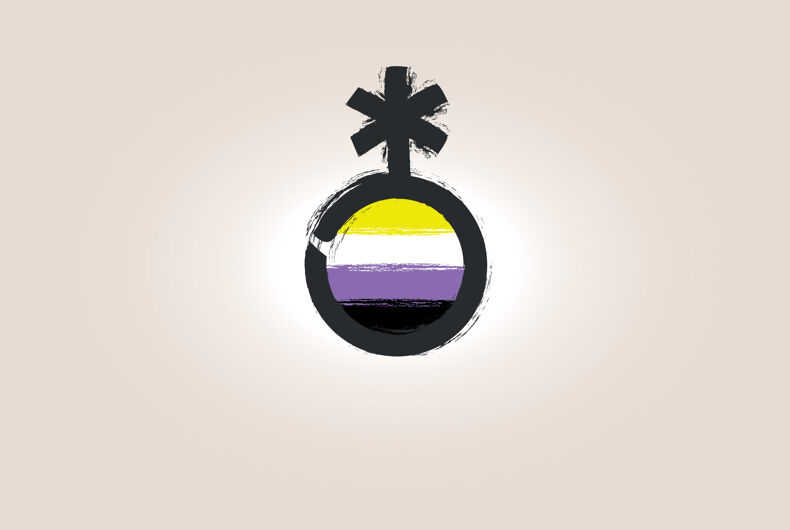 People who identify as non-binary reject the concept of gender as, well, binary. For non-binary people, the world isn’t divided into just male or female. Instead, they view gender as a spectrum in which one can identify somewhere in the middle or even outside of it altogether. As such, non-binary people do not strictly identify as either men or women.

Related: Over 5% of young adults identify as transgender or non-binary

Before we talk about the non-binary gender symbol, let’s get a few basics out of the way first. What are gender symbols in the first place? And where did they originate?

Gender symbols are glyphs or graphics that are designed to represent a particular gender. The most popular gender symbols – the male ♂ symbol and the female ♀ symbol – came into use in the 16th century, when a botanist named Carl Linnaeus used the glyphs to denote the genders of flowers in his books Mantissa Plantarum and Mantissa Plantarum Altera.

Linnaeus also used the symbol ☿, also known as the symbol for Mercury, to denote “hermaphroditic” flowers or flowers that had both stamens and pistils. All these symbols are rooted in Greek astronomy, which associated certain gods with planets, metals, and traits:

What Is The Non-binary Symbol?

There is no official non-binary symbol in the same way that we have an official male and female symbol. However, in recent years, many non-binary people have adopted a symbol that consists of a circle, a straight line sprouting from the top, and an “X” at the end of it.

According to Jonathan R., a Tumblr user who is credited with introducing this non-binary symbol, the “X” seemed fitting as it had recently become a “symbol of the non-binary, in pronouns and titles”. This is perhaps in reference to how some countries are adding a third gender marker (“X”) in passports and other legal documents to give gender non-conforming people another option outside of “M” or “F”. The honorific “Mx.” has also recently been introduced as a gender-neutral alternative to “Mr.” and “Ms.”.

Again, the circle with the “X” isn’t the official symbol – it’s just one of the more popular versions out there. Other proposed non-binary symbols include:

The Agender And Neutrois Symbols

Non-binary is a word that is used as both a gender identity and an umbrella term that encompasses a variety of other gender identities that don’t conform to the gender binary, including agender and neutrois.

Agender people identify as being “genderless” or having no gender. Neutrois is a similar term that can be described as “the absence of gender” or being gender-neutral. As such, they share a similar symbol – the null symbol – which is characterized by a circle with a back slash going through it. Typically found in mathematics to denote an empty set, the symbol resonates with agender and neutrois people.

Demigender people identify only partially with one gender. A demiboy is someone who identifies partially as a man.

The demiboy symbol, designed by a group of gender non-conforming Brazilian artists in 2014, was first shared on the website Deviant Art by user Cari-Rez-Lobo. The symbol is depicted as the male or Mars symbol but with half of the extending arrow missing.

Like demiboys, demigirls only partially identify as women. The symbol, also created by the same group of non-binary Brazilian artists, is similar to the demiboy symbol in design. It is depicted as a female or Venus symbol but with half of the cross missing.

Proposed as an alternative to the “X” gender symbol, this symbol depicts a comet, with a circle and three lines shooting toward the upper right. The comet was proposed because the male and female symbols both represent planets. As non-binary people identify as neither male nor female, the artist used another astronomical representation to symbolize how different non-binary people are.

While the non-binary symbol is not as well-known as the male and female gender symbols yet, it is gaining popularity in recent years. If you see this symbol online or in real life, know that it represents someone who does not identify with the traditional male or female genders. If you are looking for a way to represent your nonbinary identity, consider using this symbol yourself.

Related: What it means to identify as neutrois