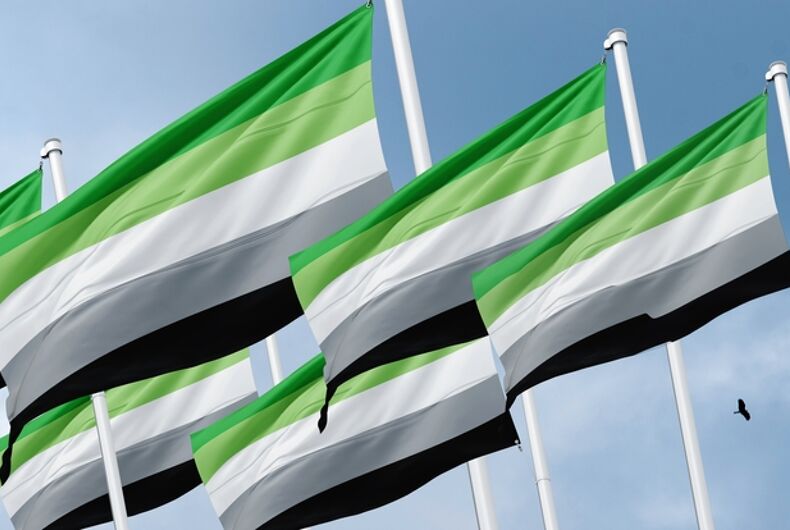 The common narrative pushed by mainstream media and popular culture is that romantic love is the only way to experience fulfillment in relationships. Despite that, there are plenty of individuals who defy this allegedly “universal” truth and don’t have the desire for romantic attraction at all – this is known as aromanticism.

As part of the LGBTQ community, aromantics have a flag that represents their orientation. Just like the rainbow in the pride flag, each color in the aromantic flag is meaningful, too.

Read on to learn more about the aromantic flag, its many versions over the years, and the meaning of each stripe.

Related: Are You Ready For Aromantic Spectrum Awareness Week?

Aromanticism is a term that describes people who feel little to no romantic attraction to anyone of any gender. Aromantics do not feel the need to have romantic relationships to feel fulfilled in their daily lives.

However, this does not mean that an aromantic or aro person is incapable of feeling sexual attraction to others, or that they are cold and heartless. Aro folks can have meaningful platonic relationships with their loved ones and also be warm and affectionate.

Currently, there is little research about aromanticism available online. However, according to The Journal Of LGBTQ Issues in Counseling, a study conducted among 414 American participants showed that nearly 1% identified as aromantic.

According to AUREA (the Aromantic-spectrum Union for Recognition, Education, and Advocacy), the earliest use of the term aromantic dates back to 2005, and its flag was created in 2014.

What Is The Meaning Behind The Aromantic Flag?

@CameronWhimsy, an Australian Tumblr user, is credited as the original creator of the aromantic flag, who published it on the platform in 2014.

The aro flag is frequently used online, although it is not as often seen in real life, likely due to stigma. It was first documented at Pride in San Francisco in 2017.

What Do The Aro Flag Colors Stand For?

The current and most widely-accepted version of the aromantic flag contains five horizontal stripes in dark green, light green, white, gray, and black. Each color represents a different tenet that gives the aromantic flag meaning.

In the aromantic flag, both shades of green represent aromanticism. This is because, on the color wheel, green is the opposite of red – the color that is commonly associated with love and romance. The white stripe symbolizes platonic love and friendships, while gray and black refer to the different parts of the sexuality spectrum.

What Is The History Of The Aromantic Flag?

There are at least three known versions of the aromantic flag.

The first known version of the aromantic flag has four stripes in light green, yellow, orange, and black. In this design, green stands for aromanticism, while yellow represents friendship – similar to the symbolism of yellow roses.

Orange was chosen because it is the color between yellow and red, referring to “gray-romantics” or people who fall in the middle of the spectrum of aromanticism and full romanticism. Meanwhile, black stood for the alloromantics, individuals who identify as romantic yet do not subscribe to traditional romantic customs.

The original designer of the first flag is unknown.

The second version of the aro flag was designed by @CameronWhimsy on Tumblr, who posted it on the social media platform on February 7th, 2014. This version contained dark green, light green, yellow, gray, and black stripes.

The symbolism of the new version was similar to the first iteration; however, the yellow in this flag represented lithromanticism, which describes people who feel romantic attraction without the desire for reciprocation.

Eventually, the flag was redesigned by @CameronWhimsy to its current version due to certain readers reporting sensory issues and cultural misunderstandings about the flag’s meaning.

Why Is The Aromantic Flag Important?

Visibility is why the presence of an aromantic flag can be both liberating and comforting for folks who identify with this lived experience.

Being aromantic does not mean one is incapable of experiencing strong feelings of love towards their friends and family. By acknowledging the aromantic experience as valid, represented by a shared flag, others who are afraid to come out and share their experiences can feel a sense of community.

Society’s understanding of the ways people experience desire, sex, and relationships continues to expand as more members of the LGBTQ community are empowered to express themselves. These discussions are vital to creating safe spaces where individuals can feel like they belong, no matter how they experience relationships.

Aromanticism is a young but growing demographic in the LGBTQ community, and having its own flag validates the lived experiences of folks who identify with this orientation. This helps more people realize they are not alone – it may give them the strength they need to proudly live their truths or even inspire others.

Related: What Do All The Versions Of The Pride Flag Mean?