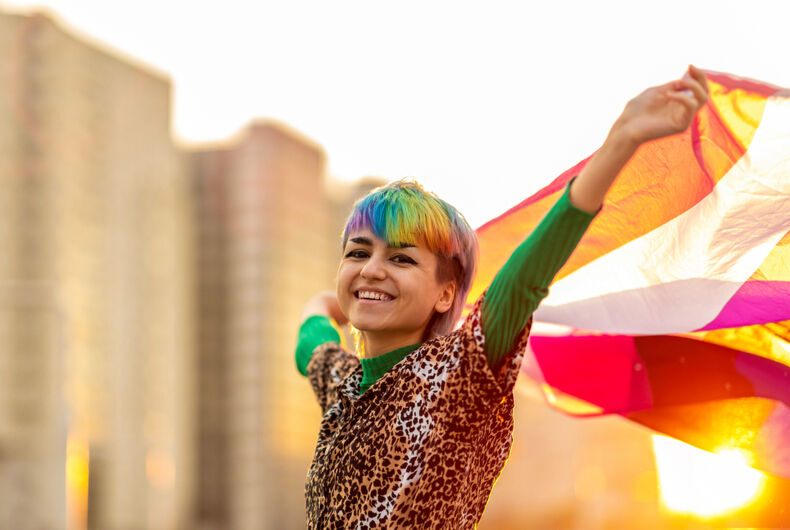 Like many gender-related terms, the concept of gender fluidity can get confusing for some. After all, if your gender identity or expression can change over time, what does that make you?

How you identify and express yourself can be daunting, especially if you are unfamiliar with gender terms such as “genderfluid”. If you’re exploring how you present yourself to the world, this quick guide will tell you what you need to know about gender fluidity.

In simple terms, the genderfluid definition is a person who is flexible in how they identify. They might consider themselves non-binary or not adhere to traditional male and female gender identifiers.

A genderfluid person’s gender identity might vary from day to day. How they experience gender can change according to specific circumstances, such as romantic relationships, how they dress, and how they converse with others.

Gender fluidity isn’t permanently fixed. In some cases, a genderfluid person might decide they identify as one gender more than another.

Most people begin to develop their gender identities in early childhood, around the ages of 2 and 3. These self-identifications might change according to how people interact with their families and peers. Sometimes, the shift from one gender identity to another takes time, while the change can also be immediate.

Because genderfluid people don’t always adhere to one gender at any given time, it can be easy to confuse them with other identities. Here are a few gender identities that often get mixed up with gender fluidity.

Gender fluidity more often refers to someone whose gender identity changes frequently. Still, keep in mind that gender fluidity can look different for everyone.

Compared to gender fluidity, gender neutrality describes people of any gender. Instead of undergoing frequent change, gender-neutral people have sexual orientations and gender identities that are not concretely defined.

Non-binary is an umbrella term that describes people of nonconforming identities, one of which can be genderfluid. Some genderfluid people also identify as non-binary – it’s all up to their personal preference.

How Do You Know You’re Genderfluid?

Discovering you’re genderfluid can be challenging because of societal expectations. Engaging in healthy interpersonal relationships can be difficult, especially when roles aren’t clearly defined. However, there are many ways to navigate this confusion and gain more clarity on your gender fluidity journey,

How To Be A Better Ally To Genderfluid People

If you know someone who is genderfluid, you might be walking on eggshells if you don’t know how to act around them. Remember, they are not any different from you! Keep these tips in mind to help you strengthen your allyship.

Discussing your gender identity with family and friends can be daunting, especially if you consider yourself genderfluid. If you or someone you know is exploring their gender fluidity, keep an open mind.

For more about the spectrum of gender identities, explore the rest of what LGBTQ+ Nation has to offer!

What does it mean to identify as agender?