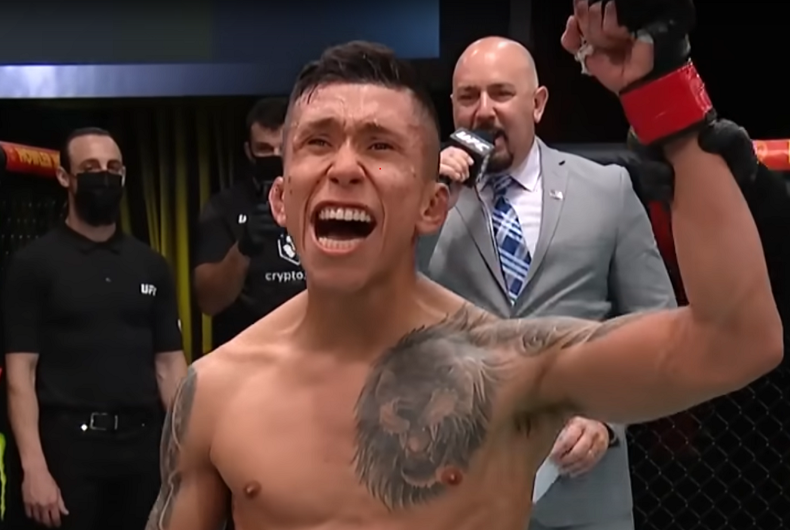 UFC star Jeff Molina isn’t pulling any punches against homophobic comments made by fans after he was spotted wearing rainbow Pride Month shorts during a fight against Zhalgas Zhumagulov. In an interview following his victory, Molina hit back against trolls saying “who the f**k cares” about what he wears.

Molina went on to say that any fan who has an issue with him wearing Pride shorts should “just be a decent f**king person.”

The shorts were mostly gray; however, they bore Molina’s name in a rainbow font. He drew criticism from some fans who called the fighter a “virtue signaller.” In the same interview, Molina went on to express why he wore the shorts. Turns out, it was no accident.

“I picked the colors because I thought it looked cool, and then also it supports a good cause,” he said.

“I’ll support anything of a community that’s been oppressed and ostracised for some time for something they can’t help. I’ll get behind any of that. It wasn’t that long ago that there was school segregation… something like Stonewall, that was like 50 years ago. This is recent s**t.”

“I just thought in 2022 people would be a little more open-minded and not pieces of s**t, but I guess I was wrong.”

“People were saying some crazy s**t and like, dude, what would you do if your kid’s gay?”

Molina isn’t just “virtue signaling” either. Molina wore his fight kit to raise money for the LGBTQ Center of Southern Nevada charity. Both he and the UFC are advocating for the organization, with the UFC donating sales from a special Pride Month t-shirt to the center.

Molina added in the rant: “It’s not even about being an ally – I’m not saying I’m not – but it’s just like, just be a decent f**king person. Just be a decent human being.”

“Judging someone, and then trying to justify it with religion, and saying all sorts of spiteful, hateful s**t is crazy to me. It’s mind-boggling.”

“Who cares who someone wants to be with, their sexual preference, and then the irony of trying to justify it with a religion of something that’s supposed to be so accepted… I was honestly shocked [by the negative reaction].”

Molina’s comments of support were welcome by LGBTQ UFC fans. UFC athletes have faced a long history of criticism in recent years for making both homophobic and transphobic comments online.

The customizable Pride apparel range from UFC is available to shop on the website at ufcstore.com. They’ve confirmed that 100 percent of the profits from sales will benefit The LGBTQIA+ Center of Southern Nevada.